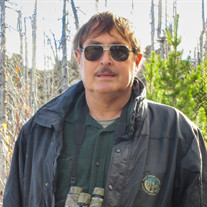 Andrew Charles Hoder, age 64, left us to be with the Lord, on January 25, 2020 after a brief battle with pancreatic cancer. Guided by his love of family, respect to all and appreciation of the outdoors, Andy became the respected and beloved husband, son, brother, uncle and friend to all who knew him. Andy was born January 3, 1956 in Schenectady, New York. He attended Colonie Central High School and graduated from SUNY College of Environmental Science and Forestry in Wanakena, N.Y. He traveled to the Pacific Northwest for employment with the Forest Service where he entered an outdoor career which he loved. In his 42 years of dedicated public service he worked in many capacities. Initially hired on as a firefighter, he later developed leadership skills on the Redmond, Oregon Interagency Hotshot Crew which lead him back to the classroom in Pullman, WA to pursue a degree in Forest Management. For decades Andy could be found in the mountains he loved marking timber, dragging a drip torch, conducting botany surveys or leading fire crews. One of Andy’s favorite jobs was serving as an aerial observer, spotting fire starts after a lightning storm. Andy’s career followed the fire and land management needs of the region and at the same time he cultivated many strong relationships with his “Forest Service Family”. As Den Leader for Tiger Cub Pack 16 and Assistant Scoutmaster for Scout Troop 16, he shared his passion for land stewardship by teaching outdoor skills to local youth. He rarely missed a meeting or special outdoor camping experience and continued to pay attention to the progress of each scout as they grew older. He was a devoted member of Cornerstone Christian Church, where he attended midweek bible study sessions, volunteered as church bus driver and assisted with various outreach and team events. He met the love of his life, Judy Murray, while they were both working for the Forest Service. They married in 1986 in a beautiful outdoor wedding held in Leavenworth, Washington. Andy never forgot the love of family that originally nurtured and guided him. He remained the respected and devoted son of Emma and John P Hoder. He returned to the New York region regularly to be with parents, siblings, cousins and friends. He is predeceased by his father, John P. Hoder and brother, John J Hoder. Andrew is survived by his loving wife of 34 years Judy E Murray Hoder, mother Emma Hoder, sisters Joan (Jim) Losee, Deen (Greg) Tetrault, father-in-law Allen E Murray, aunt Kay (Howard) Bumgarner, sister-in-law Debbie (Carl) Fritts, brothers-in-law Steven (Karen) Murray, Eddie(Jean) Murray, Monte(Christe) Murray, sister-in-law Jennifer(John) Hughes and many loving cousins, nieces and nephews. In lieu of flowers donations may be made to Cornerstone Christian Church to the address above or Lustgarten Foundation Pancreatic Cancer Research, 415 Crossways Park Drive, Suite D , Woodbury, NY 11797 After much consideration the family members have made the difficult decision to postpone Andy's memorial service given the evolving situation with COVID-19 in Washington State. Judy is grateful for the outpouring of support over the past several weeks and will keep everyone informed when the new date of the service is scheduled so we can all gather and honor Andy's life.

Andrew Charles Hoder, age 64, left us to be with the Lord, on January 25, 2020 after a brief battle with pancreatic cancer. Guided by his love of family, respect to all and appreciation of the outdoors, Andy became the respected and beloved... View Obituary & Service Information

The family of Andrew Charles Hoder created this Life Tributes page to make it easy to share your memories.