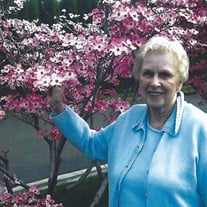 Martha Ann (Wood) Nelson was born in Chicago, Illinois on May 31, 1928 to Firman Smith Wood and Margaret (McColluch) Wood. During her ninety-two years of life she was known as Martha, Ann, Marty, Mert, Woody, Mom, Grandma, Aunt Annie, Blondie, and Officer Nelson. Although she lived in eight different states during her first 35 years, she was a resident of Yakima, Washington from 1963 until 2020. She passed away in Wenatchee, Washington on August 7, 2020. In 1933, Ann and one of her sisters spent the summer on their grandparents’ homestead near Presho, South Dakota. They experienced frequent dust storms, lots of rattlesnakes, but no running water or electricity. Upon their return to Chicago, they learned that their parents had divorced and that they would be living with their father. In 1935, her father married Ruth Benson and she and her sisters gained a loving step-mother. Over the next decade, she also gained three more sisters while the family lived in Cleveland, Ohio; La Grange, Illinois; and Fort Wayne, Indiana. During her high school years in Fort Wayne, she developed a love of music and played the flute and the violin. Ann was also an active member of the Pilgrim Youth Fellowship. She graduated from Elmhurst High School in 1946 and was the first person to enter Coe College with a perfect score on the Seashore Musical Aptitude Test. Ann attended Coe College for two years and transferred to George Williams College in 1948. In the fall of 1948, while at George Williams College, she met Ollie Nelson on a College outing and they had their first ride on a tandem bicycle. They were married on June 11, 1949 and they took their honeymoon on a tandem bicycle. During their 70 years of marriage, they were two wheeled partners in more than 40 states, Canada, England, Scotland, Sweden, Holland, and the Netherlands. They enjoyed a variety of outings in the Northwest with their “Over the Hill Gang” bicycle group and in 1996 they traveled 2500 miles on their tandem bike from Yakima, Washington to Fort Wayne, Indiana for Ann’s 50-year high school class reunion. After graduating from college with degrees in Group Work Education, Ann and Ollie moved to Grand Rapids, Michigan where Ollie started his career at the YMCA in 1951. Sons Eric and Karl were born in Grand Rapids. In 1957, they moved to Fargo, North Dakota. Daughters Kristi, Karen and Kathie, were born in Fargo and, in 1963, the Nelson family moved to Yakima, Washington. Ann was blessed with a beautiful soprano voice and that opened doors to some wonderful experiences. She sang with four different Methodist Church Choirs and the Yakima Symphony Chorus for more than thirty years. She participated in choral presentations at Carnegie Hall in New York City and at the Rockefeller Chapel at the University of Chicago. She performed in several musicals, and sang at numerous weddings and funerals over five decades, but her most cherished memories were of singing lullabies to her five children. Ann loved the mountains and the ocean and enjoyed many family campouts. She climbed Mount St. Helen’s, Mt. Hood, and Mount Adams (seven times). In 1968, she hiked the entire Wonderland Trail around Mt. Rainier. She was a member of both the BX Chapter of PEO and Wesley United Methodist Church for more than 50 years. Ann was a member of the Nob Hill School PTA and a Bluebird leader for several years. She enjoyed playing bridge and was also a talented swimmer who once held the regional age group record for the 100-yard backstroke. She had a father, husband, son, and daughter who worked professionally for YMCAs. She helped wait tables for banquets at the Fort Wayne YMCA and was a Youth Center supervisor for the Lawson Street YMCA in Chicago. She also worked as a car hop (at Indiana’s first drive-in), a department store clerk, a day camp counselor, a policewoman, an encyclopedia salesperson, and a bank teller. She was an expert seamstress. She made many of her own clothes in high school, her wedding gown in her dorm room at college, and, when finances were tight, she made many clothes for her children. Above all else, Ann cherished family. It was her priority that her children be close with their relatives near and far. From weekend campouts, trips to the ocean, and many cross country road trips in a Volkswagen camper, Ann’s children have been blessed with a lifetime of memories to carry them through. Ann was preceded in death by her parents and step-mother; her husband of 70 years, Ollie Nelson; sisters Peggy Wood, Kathleen (Reed) Troxel, and Merry Wood; and a son Karl Edwin Nelson. She is survived by sisters Susan (Steve) Bailey, and Sallea Wood (Joe Goodman); children Eric (Jean) Nelson, Kristi (John) Heilman, Karen (Carl) Marsh, and Kathie (Steve) Williams; grandchildren Kerri, Libby, Karli, Cody, Heather, Jason, and Chase; and three great-grandchildren. In consideration of the health and safety of friends and relatives, her Memorial Service will be scheduled at a later time.

The family of Ann Nelson created this Life Tributes page to make it easy to share your memories.

Martha Ann (Wood) Nelson was born in Chicago, Illinois on May...