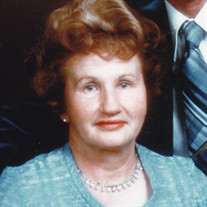 Ann Elizabeth Uhrich passed away October 21, 2021. She entered into Heaven, into the loving arms of Jesus. Ann had put her faith in Jesus Christ as a young woman. Ann was born April 8, 1926 in Flint, Michigan. Ann’s family then moved to Alberta, Canada, where Ann was raised on a wheat farm and attended school. Ann met the love of her life, Clarence Uhrich, in 1946, while Clarence and his parents were visiting Ann’s parents in Alberta, Canada. Ann and Clarence married in 1947. Ann then moved to Waterville with Clarence to live on the wheat ranch. Ann and Clarence later moved to Wenatchee, but still maintained the wheat ranch. Ann always had a positive, kind, encouraging attitude toward people. She had a passion for her family. Ann was a very good cook. She always enjoyed having guests and entertaining. Ann also loved to draw and was artistic. Ann was a member of the Waterville Lutheran Church, where she also taught Sunday School. Ann and Clarence attended Wenatchee Free Methodist Church after she and Clarence moved to Wenatchee. Ann was preceded in death by her parents, Henry and Elizabeth Busch, a sister, Hilda Sailor, her husband, Clarence Uhrich, and a son, Randy Uhrich. Ann is survived by two daughters, Diane Uhrich, of Wenatchee and Darlene Uhrich of Cashmere; daughter-in-law, Mary Uhrich and granddaughter, Katie Uhrich, both of Wenatchee. She is also survived by three sisters, Freda Peterson, Marie Ginther, and Martha (Gordon) Elhard; three brothers, Vic (Sharon) Busch, Fred (Juanita) Busch, and Henry Busch; and many nieces and nephews.

Ann Elizabeth Uhrich passed away October 21, 2021. She entered into Heaven, into the loving arms of Jesus. Ann had put her faith in Jesus Christ as a young woman. Ann was born April 8, 1926 in Flint, Michigan. Ann&#8217;s family then moved... View Obituary & Service Information

The family of Ann Elizabeth Uhrich created this Life Tributes page to make it easy to share your memories.