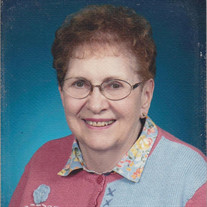 Anne (Henrikson) Hoesl passed away on March 15, 2020, at Regency Wenatchee Nursing Home, peacefully surrounded by family. Anne was born on a farm in Towner County, ND, in the fall of 1930 to Carl and Bertha (Cadieux) Henrikson. She was the middle child with two older brothers, Donald and John, and two younger brothers Carl and George (George passed away as a baby). Anne graduated high school in Perth, ND, then attended Minot State College and received a Standard (two-year degree) Teaching Certificate. Anne taught elementary school grades in rural schools in ND; Sarles, Inkster, Hansboro and Rolla. She loved teaching and was very resourceful using her talents of art and music to help the elementary children put on plays. Anne played the piano. She taught elementary school for seven years before she met and married Donald Hoesl, the Optometrist at Rolla, ND. She quit teaching and raised a family together with her husband in Rolla. Anne was active in church and civic functions serving on the Rolla School Board, Library Board, Rolla and Wenatchee Catholic Church guilds and committees, and raising money for various charities. She loved to visit and had an open-door policy for friends to stop by for a cup of coffee and homemade baked bread, buns with raspberry sauce or caramel rolls. Many home cooked meals were enjoyed often ending with a piece of homemade pie. Numerous family car trips to see tourist attractions in ND and neighboring states as well as car trips up to Alberta, Canada, to visit French Canadian relatives were made. Many stories were shared about “the old days” and an appreciation for the arrival of electricity, running water, telephone, and modern appliances. Anne and Donald modeled a strong work ethic to their children, using every opportunity to teach life skills. They also encouraged obtaining an education. When Donald retired, they sold their house in Rolla, ND, and moved in 1995 to Wenatchee, WA, to be near children and grandchildren. They spent a few years traveling the world, then settled into a quiet life of enjoying family and church activities. Anne was preceded in death by her parents and brothers Donald, John, Carl and George. She and Donald suffered the loss of their thirteen-year-old son, Steven, in 1973 from a sudden illness. Donald passed away in 2013. Surviving Anne are children: John Hoesl, Pamela (Joe) Altazan, Carla (Tom) Kane and Linda (Tim) Lykken; and grandchildren: Paul (Nisrine Jednane-Kane) Kane, Michael Kane, Brian Kane, Savanna (Aristotle) Martin, Marisa Lykken, Zachary Lykken. Also surviving are a sister-in-law, Aileen Henrikson, and beloved nieces and nephews and their families. Anne will be missed greatly as she was the matriarch of this family, someone to whom we looked to for advice through the years or just to enjoy her company. May her spirit and zest for life live on in us and memories of her continue to make us laugh and warm our hearts. A Memorial Mass is planned for a later date in Wenatchee, WA. Anne will be laid to rest beside her loving husband Donald in St. Michael’s Cemetery, Rolla, ND. Arrangements are by Jones & Jones-Betts Funeral Home, Wenatchee, WA and Elick Funeral Home, Rolla, ND.

Anne (Henrikson) Hoesl passed away on March 15, 2020, at Regency Wenatchee Nursing Home, peacefully surrounded by family. Anne was born on a farm in Towner County, ND, in the fall of 1930 to Carl and Bertha (Cadieux) Henrikson. She was the middle... View Obituary & Service Information

The family of Anne B. Hoesl created this Life Tributes page to make it easy to share your memories.