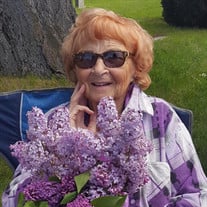 Barbara was called to her beloved heavenly home on August 21, 2020, the day after her 90th birthday. She was surrounded by the love of her family. Born August 20, 1930, to Harry and Gladys Jones of Waterville, Washington, she was the middle of three children. She attended school in Waterville where she met her future husband, Stanley M. Firoved. They were married in 1947 and made their home in Waterville. Barbara, the mother of seven children, worked at the Waterville Post Office for several years. After earning her AA Degree at Wenatchee Valley Community College, she was promoted to the position of postmaster in 1980. She retired in 1990 after 38 years. Barbara was an extraordinary woman and lived a very active life. She was a life-long member of the Waterville Federated Church, serving on various committees. She was involved with Methodist Ministries since 1974 and taught Sunday School, led Bible studies and was a youth leader/counselor/camp dean at Methodist Youth Camp for 19 years. She was a member and later chair of the Douglas County Hospital Board, and a member and one term secretary for the Waterville Chamber of Commerce. Shortly before her postal retirement, she began taking classes and training for assignment as a lay minister. After completing five years in Bible Study, she was assigned as pastor to the Pe Ell,Washington, Methodist Church. At age 66, she moved from Waterville for the first time in her life and embarked on her biggest adventure. She was warmly welcomed into the tiny lumber community and made many life-long friends. She was a member and later president of the Pe Ell Kiwanis club and a member of the Pe Ell Senior Citizens. Wanting to be closer to family, in 2002 she moved to Pateros where she was lay pastor of the Pateros Methodist Church. After serving the church for three years, Barbara retired once again and moved to Alta Lake. That retirement was short-lived as she was recalled to Pe Ell, where she returned to the congregation and people she so dearly loved. During her time of service to her Lord, Barbara also officiated at many family weddings, funerals and baptisms, making those occasions special to grandkids, great-grandkids, nieces and nephews and other community members. In 2010, she officially retired from pastoral duties and moved to Heritage Haven in Wenatchee where she quickly became a familiar resident, leading weekly Bible studies and attending community coffees and potlucks. Though retired, Barbara was often called upon by community members to perform weddings or lead funeral services. Churches would call on her to fill in for ministers on leave. On August 2, 2020, she preached her final sermon at the Waterville Federated Church. As a mother, Barbara was always there for her children, offering encouragement and support, and proud of their accomplishments. Grandchildren would also spend time at Grandma Barb’s while taking swim lessons or attending Vacation Bible School. Barbara loved reading, traveling, playing board games, and most of all family gatherings where she welcomed all and embraced the belief that the more the merrier. Barbara was preceded in death by her husband Stan, her parents, her brothers Charles andPaul Jones, daughter-in-law Susan Firoved, and granddaughter LeeAnn Firoved. She is survived by her children Bobby Ann (Norm) Willms, Waterville; Randall S. (Carol) Firoved, Manson; Kenneth N. (Marcia) Firoved, Deer Park; Rodney Firoved, Entiat; Rebecca S. (Steve) Jordan, Waterville; Alan R. (Linzie) Firoved, Waterville; and Lynne M. Firoved, Wenatchee. She is also survived by 11 grandchildren, 15 great grandchildren, one great, great grandson, many nieces and nephews and many special friends. A Graveside service will be held at the Waterville Cemetery at 2:00 p.m. on Friday, August 28, 2020. Visitation will be Thursday, August 27, 2020, at Jones & Jones-Betts Funeral Home from 5:00 to 7:00 p.m. Memorial contributions may be made to the Waterville Ambulance fund or the Waterville Cemetery District.

Barbara was called to her beloved heavenly home on August 21, 2020, the day after her 90th birthday. She was surrounded by the love of her family. Born August 20, 1930, to Harry and Gladys Jones of Waterville, Washington, she was the middle... View Obituary & Service Information

The family of Barbara L. Firoved created this Life Tributes page to make it easy to share your memories.

Barbara was called to her beloved heavenly home on August 21,...