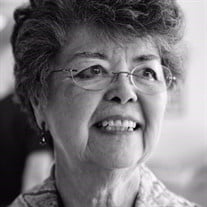 IN MEMORIUM Barbara Marie (Richards) France May 26, 1932 to April 21, 2019 Wenatchee WA Barbara Marie France, 86, of Wenatchee, Washington passed away peacefully on Easter Sunday, April 21, 2019 after an extended battle with dementia, at Blossom Creek Memory Care Center. Barbara was born on May 26, 1932 at Deaconess Hospital in Wenatchee, WA to Ralph and Matilda “Tilly” Richards. She grew up in East Wenatchee where her father was Superintendent of Schools and her mother an English teacher. She had two younger siblings, Ronald “Ron” and Janet, the youngest. She graduated from Wenatchee High School in 1951 and later attended college classes at Seattle Pacific College and University of Nebraska. Barbara and her school-mates in East Wenatchee were sometimes known as “bridge walkers.” To get to Wenatchee, she had to walk across the South Bridge, high above the rushing water of the Columbia river, to visit West-side friends and attend Free Methodist church services. When she was 16 years old, Barbara’s good friend and Free Methodist church-mate, Zane Poltz, introduced her to future husband Clell France, on a blind date. Three years later, in 1951, Barbara and Clell married at Ohme Gardens, on her 19th birthday. “Clell & Barb” as they were known, had two children: Scott in 1956, and Michelle in 1966. The family moved from Wenatchee to Seattle in 1960, then Lincoln, Nebraska in 1963 where Barbara worked various office jobs to support the family while Clell earned a doctorate in Clinical Psychology. After eight years in the Midwest, the family returned home to Wenatchee in 1971. Through the years Barbara worked in various office jobs: her early married years at Vandevort construction in Wenatchee, then a clothing maker in Seattle, and after taking some college courses, a “modern” data processing job utilizing IBM punch cards. In 1985 she became the office manager and receptionist at Clell’s “Psychological & Counselling Services” private practice in Wenatchee. There she enjoyed meeting and visiting with clients, managing the books, and providing independent accounting services to a handful of Wenatchee Valley businesses, using a new device called a “personal computer.” Upon retirement in 1999, Barb & Clell embarked on their “motor home adventure years,” commuting between their Winter home in Yuma, AZ and their Summer house on the South shore of Lake Wenatchee. Sometimes they just “motorhome camped” in Wenatchee on a friends lot. On their “snow bird” migration up the California coast each year, they often stopped to visit son Scott and family in San Francisco, daughter Michelle and family in Auburn, WA and Barbara’s cousin Lois in Oregon. Barbara had a profound sense of duty, to her family, her church and her work. And she cherished her husband Clell. She was always fastidious, from setting a beautiful table, to making the “perfect” apple pie, to balancing the family checkbook. She was adept in assembling vibrant color schemes for clothing, interior design, and home décor. She had a knack for picking good real estate investments, then fixing them up with husband Clell for sale few years later. And, she had a noteworthy “green thumb,” creating dramatic exterior landscaping, and nurturing plants and flowers in the home, flourishing in some cases for decades. Barbara will be remembered for her enduring Christian faith, strong morals and her love of family. She was an active member of the Church of God, Faith of Abraham and enjoyed Women's Fellowship, choir and preparing for church functions. She loved to sing and was active in her high school and church choir. While she instinctively shied away from the spotlight, she was often selected to perform solos due to her beautiful singing voice. Barbara also treasured extended family and family history, stories and genealogy. She particularly enjoyed the annual “Richard’s Cousin’s Reunion,” often convened on the Oregon or Washington coast in a large rented home or a lodge. Running as long as a week, the cousins had ample time to re-connect, reminisce and share stories of the previous year. Barbara is survived by her loving and devoted husband of nearly 68 years; son Scott (Cara) France, of San Francisco CA; daughter Michelle (Kenny) McMullen of Auburn WA; sister Janet (Hank) Flores; sister-in-law Marilyn (Ronald) Richards; grandchildren Rylan McMullen, Tandara France, Gabriel France, and Lily McMullen; as well as numerous cousins, nieces and nephews. She was preceded in death by her parents Ralph and Matilda “Tilly” and brother Ronald Richards. Services to be held at the Wenatchee Church of God, Faith of Abraham, 1835 N. Western, on Friday, May 3 at 11:00 a.m. Pastor Robin Todd officiating. From Clell and the extended family: A special thanks to the staff at Blossom Creek, Hospice and her caregivers for their tender care of Barbara in her final months.

The family of Barbara M. (Richards) France created this Life Tributes page to make it easy to share your memories.