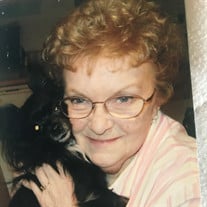 Mary Barbara (Mattheisen) Rix, 83, of Wenatchee, passed away on March 30, 2019 in her longtime hometown of Wenatchee, Washington. She was born on July 31, 1935 in Walker, Minnesota to Gladys and Andrew Mattheisen. She was one of eight children. She graduated from Wenatchee High School in 1953 and married Chuck Rix on Oct 15, 1954. They had four children whom she loved with all her heart: Teri, Chuck, Lori, and Greg. Barbara held many special jobs and roles in her life and she took great pride in serving others and the Lord. One of her favorite jobs (and a favorite of her children) was her time at the Owl Drug Soda Fountain in Wenatchee. Barbara was a devout Catholic and a member of two Churches: St Joseph’s Catholic Church and Holy Apostle’s Catholic Church. She could most always be found there participating in various service groups and helping others as she always did. Barbara had 12 grandchildren and 7 great grandchildren who were the light of her life. She was fondly called “Gramma, Grams, Gra-mama, Nana, and Nan-ama”. Barbara’s loving legacy is best shared in the lessons she taught: Love God, Love Others, Speak with Kindness, and Set an Example. Barbara is preceded in death by her two brothers Bill and Ken, her sister Trina, and her parents Gladys and Andrew. Barbara is survived by her children: Teri and Carl Larson of Wenatchee, Chuck and Melissa Rix of Wenatchee, Lori and Eldon Ochs of Wenatchee, Greg and Becky Rix of Wenatchee, sisters Diane, Jane, and Kay, brother Steven, her grandchildren: Charity, Tyler, Stephanie, Sharmi, Amanda, Myka, Kelsey, Nathan, Carly, Kristen, Wesley, and Kaylin, her great grandchildren Jaxon, Jayda, Teegan, Skyla, Aryanna, Carolina, and Elenor, and her constant companion: her sweet dog, Sassy. Memorial service, holy mass and celebration of life reception will be held at Holy Apostle’s Catholic Church on Friday, April 12 at 1pm, officiated by her good friend and priest Father Orosco who vistited her and Sassy weekly. Memorials may be given to Riverwest Assisted Living Pet Fund in honor of her beloved dog Sassy. The family of Barbara Rix wishes to extend our sincere heartfelt thanks to Riverwest Assisted Living and her wonderful caretakers Angelica, Veronica, Tracy, Tohnya, Angie, Elvira, Aurora, Jamie, and the rest of the amazing team.

Mary Barbara (Mattheisen) Rix, 83, of Wenatchee, passed away on March 30, 2019 in her longtime hometown of Wenatchee, Washington. She was born on July 31, 1935 in Walker, Minnesota to Gladys and Andrew Mattheisen. She was one of eight children.... View Obituary & Service Information

The family of Barbara Rix created this Life Tributes page to make it easy to share your memories.