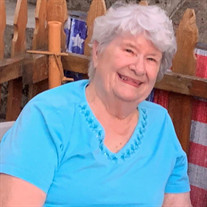 Berna Jean Roche passed away peacefully to be with her Lord and savior on July 14, 2021. She was born in Coeur d’ Alene, Idaho on August 24, 1931, to Andrew and Margaret Hjort. She grew up in Coeur d’ Alene and graduated from high school in 1949. She met the love of her life, Bill Roche, on a summer day while paddling a canoe on the lake. They married on November 22, 1950 at St. Thomas Catholic Church in Coeur d’ Alene. Their first home was in Cheney,WA where Bill was a student at Eastern Washington State College. Bill and Berna welcomed their first of seven children, daughter Debbie, in 1951, soon to be followed by Bill, Dan, Tom, Laurie, Kay, and Bev. They lived in Hartline, WA for 14 years where Bill was a teacher and coach. They moved to Soap Lake, WA in 1966 where Bill taught and coached until 1983. Berna worked many years at Myra’s Dress Shop in Soap Lake after her children were in school. She was an incredible seamstress and made many of her girls and granddaughters clothing as well as quilts for all her grandchildren upon their high school graduation. Berna and Bill greatly enjoyed their retirement with grandchildren, and great grandchildren. Family meant everything to them. They traveled across the USA, took ocean cruises and also visited Ireland and Sweden, discovering their family roots. They spent most of their winters in Arizona throughout their retirement. Bill and Berna felt blessed to celebrate their 70th anniversary last November. Theirs was a true love story. Berna was an accomplished golfer, winning the club championship. She was the best putter in the family. Berna’s greatest gift and passion was as a loving wife, mother, grandmother, and great grandmother as well as a friend to many. Her beautiful smile and sparkling eyes lit up any place she went. She had a way of making you feel like you were the only person in the room. Berna is survived by her loving husband, Bill Roche, East Wenatchee; siblings: Bill Hjort, Coeur d’ Alene, ID; Karen Lewis, Helena, MT; children: Debbie (Doug) Beaudry, Ephrata, WA; Bill (Mary Kay) Roche, Whitefish, MT; Dan (Debbie) Roche, Leavenworth, WA; Tom Roche, Ellensburg, WA; Laurie (Bob) Miller, East Wenatchee, WA; Kay (Bill) Larson, Wenatchee, WA; Bev (Steve) Chandler, Spokane, WA, 17 grandchildren, 17 great grandchildren and numerous nieces and nephews. The rosary for Berna will be held at Holy Apostle Catholic Church in East Wenatchee, Tuesday, July 20, at 7:00 PM. Her funeral Mass and celebration of life is Wednesday, July 21, at the church at 11:00 AM, followed by a graveside service at Evergreen Memorial Cemetery in East Wenatchee and a reception at the church. In lieu of flowers, donations may be made to The Soap Lake Education Foundation, PO Box 161, Soap Lake, WA. 98851

The family of Berna J. Roche created this Life Tributes page to make it easy to share your memories.

Berna Jean Roche passed away peacefully to be with her Lord and...