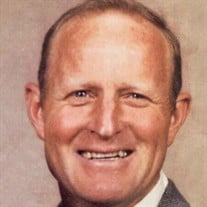 Bernard Lee "Von" Corbaley, age 78, passed away on June 18, 2020. Von was born October 14, 1941, to John Arthur “Jack” Corbaley and Virginia Katherine Corbaley at Tacoma General Hospital. He lived in Los Angeles, CA, as a baby and the family moved to Vernonia, OR, when he was a small child. When Von was in the 4th grade, they moved to Cashmere, WA, where he graduated in 1960, from Cashmere High School. Von met Shirley Barnhill through bible classes at The Church of God, Faith of Abraham, and they married on August 18, 1963. During his life, he had several occupations, but logging was his favorite. He loved the outdoors and was the youth leader in the church. He enjoyed hiking into high mountain lakes, where he would teach kids to fish and camp. Von was passionate about spreading the word of God to those in foreign countries and traveled to the Philippines and to Africa, doing the Lord's work. One of the few personal trips that he took with Shirley, was to Israel, where he was able to see many of the places that he studied about in the Bible. In 1991, Von was diagnosed with Parkinson's. Even with the diagnosis, he continued his work in the church and hiked, until he was no longer able. After Parkinson's took his ability to walk, he continued to bring joy to the sick and elderly, by riding his scooter across town. Von was preceded in death by his parents, “Jack” and Virginia Corbaley; and brother, Dee Corbaley. He is survived by his wife, Shirley Corbaley; sisters, Virginia Westerberg and Shirley Merritt; daughters: Christine Rich, Wendy LeSesne, and Pam Frantz; son, Tim Corbaley; seven grandchildren: Kat Turner and Charles Rich, Colton and Trevor LeSesne, Titus, Nahum and Naomi Corbaley; and great-granddaughter, Izzie Turner.

The family of Bernard Lee "Von" Corbaley created this Life Tributes page to make it easy to share your memories.