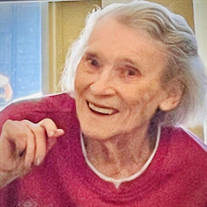 Beryl Yvonne Spoelstra passed away peacefully on May 9, 2022 at Highgate Senior Living in Wenatchee, Washington. She was 88 years old. She joins her parents, brother and husband, Johnny, in Heaven. She was born Jan 23, 1934 in Nevis, Minnesota, the daughter of Walter H. Pearson and Doris Pearson, and the sister of William Pearson. They would later move to Everett, Washington where she graduated from Everett High School in 1952. It was there she met John Spoelstra and they were married on November 20th, 1953. They were married for almost 67 years, until John passed away on September 10, 2020. Beryl, or Scoot as she was known to friends, enjoyed being faithful to her church and to God. She was a member of the Everett Christian Reformed Church, Cascade Christian Reformed Church in Marysville, WA and later Calvary Bible Church in Wenatchee. She also enjoyed family vacation camping trips with her children and grandchildren. Beryl Spoelstra worked at various careers growing up, but really enjoyed working for Kingsize Photo in Everett and later The Wenatchee School District for 23 years, 1972-1995. Her most devoted passion was being a wonderful Mother and Grandmother. Her life meant something to everyone who knew her and her family loved her very much. Beryl is survived by their children Robert John Spoelstra (Bob) of Wenatchee, Washington and Judith Marie Spoelstra of San Diego, California. Beryl and John also have 4 grandchildren Kaitlyn, Kaiden and Kailee (Herrick) Spoelstra of Wenatchee and Evan Spoelstra of San Diego, Ca. Beryl will be buried with her husband John at Cypress Lawn Memorial Park, 1615 SE Everett Mall Way in Everett, WA on May 25th at 1:00 pm. There will be a memorial service pending at Calvary Bible Church in Wenatchee, WA at a later date.

Beryl Yvonne Spoelstra passed away peacefully on May 9, 2022 at Highgate Senior Living in Wenatchee, Washington. She was 88 years old. She joins her parents, brother and husband, Johnny, in Heaven. She was born Jan 23, 1934 in Nevis, Minnesota,... View Obituary & Service Information

The family of Beryl Y. Spoelstra created this Life Tributes page to make it easy to share your memories.

Beryl Yvonne Spoelstra passed away peacefully on May 9, 2022...