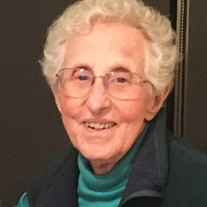 Betty Lutz lived nearly all of her amazing life in Central Washington. She passed quietly in the home of her loving daughter on July 21, 2021 at the age of 92. Betty arrived in Wenatchee from her birthplace in Detroit, Michigan, shortly after her birth on June 15, 1929. It was the trough of the great depression and times were tough. Her mother, fleeing a troubled marriage, brought she and her brother Carlton across the country to reside with relatives in the Wenatchee Valley. In a few years her mother remarried Cleve Cross and the family moved to a farm in the town of Methow where they lived until her school years. Betty attended and graduated from Wenatchee High School. After high school she attended Kinman Business University in Spokane, Washington, gaining skills she would use the rest of her life. Shortly after returning to Wenatchee from Kinman she met her future husband Dick Lutz. Together they started a new journey that would carry them over the next 70 years. Early in her career Betty worked for Wells and Wade Hardware and later the Wenatchee World. From there she took on a demanding role supporting Chester Kimm at the Chelan County Industrial Development Council. On nights and weekends she and her husband began the project of developing orchards in the Wenatchee Valley. Because Dick’s job required extensive travel throughout the Northwest, Betty was not only responsible for raising the family but also managing the orchard operations on a daily basis during Dick’s absences. She proved more than capable. Eventually, juggling the responsibilities of the orchard and those of her growing family became too much so she left her position at the Development Council. Through their marriage Betty and Dick developed apple and cherry orchards in Wenatchee, Chelan and Manson while earning multiple top grower awards from Stemilt and Trout/Blue Chelan. Farming was their passion. Ultimately, Betty managed the finances while Dick ran the farm. In the 1970’s, Betty and Dick purchased property on Lake Chelan. What started with a small 12 ft. trailer for summer camping at “the lake” eventually became their final home. Together, over 20 years, they hand built the house where together they would happily live out the remainder of their lives. Nothing was more important to Betty and Dick than family. Their Lake Chelan home was always open to their large, extended family that included their children, grandchildren, brothers, sisters, nieces, nephews, cousins and friends. Everyone was welcome. As long as somebody wanted to ski, they were willing to drive their boat. In later years, Betty never missed a school activity, concert, or sports event that involved her grandchildren. She always wanted them to know they were most important in her world. Betty had a well-earned reputation for her cookies and pies. Her Christmas cookies and peanut brittle are legendary in the family. As you would expect, few people could match the apple and cherry pie prowess prepared by the woman who grew the fruit. Betty is survived by her daughter Karen Lutz McCutcheon (Don) and her son Steve Lutz (Jan), both of Wenatchee; sister, Nancy Mazna of Lodi, California; brother, Ralph Cross of Tacoma, Washington; granddaughter, Jessica McCutcheon of Los Angeles, California; grandson, Steven McCutcheon of Chicago, Illinois; grandsons, Richard Lutz and Taylor Lutz both of Seattle, Washington; grandson, Parker Lutz of East Wenatchee, as well as many nieces and nephews. She was preceded in death by her loving husband Dick, her mother Nannie Frances Cross, her brothers E. Carlton Highfill, Ivan Cross, Marvin Cross, Bert Cross, Veryl Cross and sisters Martha Olsen and Velma Guffy. The family would like to express their thanks and sincere appreciation to Hospice, as well as the entire medical team at Confluence Health who worked tirelessly to provide exemplary care for Betty. Special thanks to Dr. Alexandra Graham and long-time physician Dr. David Houghland, who we consider to be among the “best of the best.” Plans for a memorial will be announced at a later time.

Betty Lutz lived nearly all of her amazing life in Central Washington. She passed quietly in the home of her loving daughter on July 21, 2021 at the age of 92. Betty arrived in Wenatchee from her birthplace in Detroit, Michigan, shortly after... View Obituary & Service Information

The family of Betty L. Lutz created this Life Tributes page to make it easy to share your memories.

Betty Lutz lived nearly all of her amazing life in Central Washington....