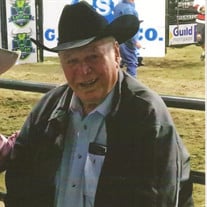 Saturday, November 14, our Mighty Oak went down. If you asked BJ his age you would find yourself accepting an invitation to his 100th birthday party in December, 2024. When you greeted him with a “How are you doing?” He always came back with the prompt reply “As I am told.” Yes, he was a character, all right. He was the patriarch of a huge and loving extended family, and was truly the "real deal." Born near Calico Rock, Arkansas to Joe and Willie Matthews, he was the oldest of 5 children. He learned to be the boss at a very early age. He served in the remount division of the quartermaster corps of the army in WWll immediately after high school graduation. The war ended after he trained 9000 mules and horses for the United States. He then found and married his "lady of all ladies," Geneva Gilliland, on Halloween Day, 1948. He lovingly appointed her "Boss Lady.” They moved from Arkansas to Wenatchee in 1952 with their two toddlers, Irene and Loraine, in tow. They settled in the Squilchuck area and added dogs, cats, a bird, chickens, cows, pigs and two more girls, Melonye and Paulette, to the mix. Moving to Wenatchee Heights in 1958, the new settlement blossomed with the comforts of a family home. He and Boss Lady continued with the dogs, cats, etc., adding more cows and horses. Finally they expanded to include cherry and apple orchards. He needed a new tractor and made such a good deal for himself that Valley Tractor management said, “Come work for us as we would rather have you making those kinds of deals in OUR favor.” Ten years later he became a full-time rancher, which had always been his dream. The combination of farmer and businessman filled his cowboy hat to the brim as he literally was still wheeling and dealing on the day he died. BJ left his ranch and moved to town a couple years ago so he could more easily obtain the care he needed as his cowboy weathered body slowed down. He often quipped “This is just a step closer” as he pointed to the neighboring cemetery. He was a longtime member of Beehive Grange, Washington Cattlemen's Association, First United Methodist Church, Ramblin’ Recs, and Masonic Lodge. He is welcomed into heaven by daughters Irene (Duane) Smith, Melonye (Don) Shurtz, granddaughter Chelsey Firor, Boss Lady, his brother Steve Matthews, and sister Mauzel Beal. Survivors include daughters Loraine (Bob) Orach and Polly (Jerry) Firor, 8 grandchildren, 22 great-grandchildren, sister Betty Jane Perryman, brother Ed Matthews and a whole truck load of tightly knit nieces and nephews and their families. Five years ago he hosted a family reunion at his ranch. With 75 family members in attendance, our patriarch was in his reining glory. With a personality larger than life, he embraced you, his dear friends. He took tremendous pleasure in “you seeing him” for burgers and fries, and maybe even discussing the next “great deal for him.” Thanks to all of you who adopted our papa as yours. Rest assured he loved each of you. Our fallen oak leaves a big gap in our forest of knowledge, yet his legacy flourishes through us all. We look forward to when we can unmask and gather to share stories - laugh - and hug - and cry. A private family service will be held. In lieu of flowers please donate to your favorite charity in his name or support your local businesses…and honor BJ by enjoying a hamburger and fries.

Saturday, November 14, our Mighty Oak went down. If you asked BJ his age you would find yourself accepting an invitation to his 100th birthday party in December, 2024. When you greeted him with a &#8220;How are you doing?&#8221; He always came... View Obituary & Service Information

The family of BJ Matthews created this Life Tributes page to make it easy to share your memories.

Saturday, November 14, our Mighty Oak went down. If you asked...