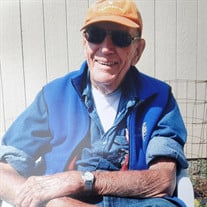 Robert Dean Pilkinton, age 91, went home to his Lord on Friday, May 15th, 2020. He was born June 18, 1928, in Leavenworth, WA, on the land that he would reside his entire life. His parents were A.J. and Edith (Cade) Pilkinton. He graduated high school in Leavenworth in 1947. He attended Perry Institute in Yakima, learning auto body repair and restoration. He joined the Navy and served four years (1951 – 1954). He was a proud member of the Sea-Bees Construction Battalion, building airstrips and airport fields during the Korean War. He was stationed in Guam, Chichijima, Adak Alaska, and Port Hueneme, CA. As a Driver 1st Class, he was an expert heavy equipment operator. Meeting on a blind date, he married Julia (he called her Jule) Doris Hlady on November 9th, 1956 in Coeur D'ALene, Idaho. While dating, instead of flowers, he would bring her radishes, her favorite snack. Over the years we reminisced and laughed about that every time radishes were on the table, which was often. He lived and worked alongside his wife on the family orchard in Leavenworth, growing pears, apples and blueberries. It was rare to see him without his red suspenders and red bandana hanky peeking from his back left pocket. He worked 39 winters, many as night boss, for the State of Washington, DOT, plowing snow and maintaining highways in the Tumwater Canyon, Lake Wenatchee and Plain area. He was a jack of many trades, able to build or fix nearly anything. What he didn’t know, he self taught, pouring over books and instruction manuals every time something went kaput. He and his father, and later his son, Tracy, did all the equipment repair for the farm, as well as creating many new “tools'' and machines along the way. Pilkinton Orchards was a member of Blue Bird Warehouse, where he proudly served as a board member for four years in the late 70’s. When he won his first term, mom made his favorite cake and frosted “Congratulations to the New B.M”. We couldn’t wait for him to walk through the door and see it. He loved it, laughing and howling. He asked her how she knew he would win… she said she just did. He was a farmer through and through, and a man always happy to be using his hands. He was continually working. As kids it was an adventure to go out at night during spring frost and light smudge pots and sit in the Honey Bee Trailer and drink cocoa. Once he arranged for us to take a ride in the crop duster helicopter, landing and taking off right in the orchard. He loved fishing when he could get away, and spent many hours enjoying the outdoors with us. Trudging through Icicle Creek hunting under rocks for periwinkles (dad called them penniwinkles) the night before a fishing expedition was as fun as being on the lake. In his younger days he was an Explorer Scout and led a troop of young Explorers in Leavenworth, teaching bow hunting and other outdoor skills. He taught Firearm Safety for many years at the Leavenworth Fish Hatchery. He was always ready to help and support his family in every way. He delighted in his role as grandpa (papa) to Kelsey Rose and Jordan. He loved to laugh, go on picnics, and play cribbage and “Kabowski” with his kids, grandkids, and friends. Two of his hobbies were leather and metal work. He and his wife attended Dryden Community Church, enjoying their extended family and loving support. After mom passed, he participated in his first Bible classes, reading the Bible from front to back. And he learned to bake pies, fruit pies, lots of them. He had watched his mother and our mom bake thousands of them. He was a colon cancer survivor. Dad was kind and sweet and cheerful, and loved to laugh, but he was no pushover. When he dug his heels in, they were set. He lived life on his terms, sometimes to the exasperation of those around him. He was tough. He taught his children to work, be responsible and trustworthy. He was true and honest and knew exactly who he was. He never wavered from his beliefs and opinions and readily shared them with others. Just this past winter and spring, he wrote his life story with the help and assistance of a hospice volunteer. Every time I visited him for months he would tell me about the stories and memories he was sharing… ones I had heard a hundred times, but I still loved the excitement in his voice. He titled it “Me and Myself”. He said “When I was very young, I was Robert, while in school I was Slim (because I was so skinny) and in the Navy and DOT I was BBB, Big Bad Bob.” He said he hoped that he had left some of his life in his children and grandchildren. You did Dad. You did Papa. We will miss you terribly, and see you again one day. Survivors include son Tracy (Leslie) Pilkinton and grandson Jordan Pilkinton, East Wenatchee; daughter Shannon Duncan, East Wenatchee and granddaughter Dr. Kelsey Rose Duncan, Cleveland, Ohio. He was preceded in death by his parents, wife and favorite son-in-law Bobby Duncan, Jr. Heartfelt thanks go to hospice team caregivers Rhonda, Sarah and Ashley, and special family friends Tony and Connie Burnett. Private family graveside services will be held at a later date at Mountain View Cemetery, Leavenworth, WA. Memorials may be made to Dryden Community Church, P.O. Box 369, Dryden, WA 98821, or American Legion Post 10, P.O. Box 2242, Wenatchee, WA 98807.

Robert Dean Pilkinton, age 91, went home to his Lord on Friday, May 15th, 2020. He was born June 18, 1928, in Leavenworth, WA, on the land that he would reside his entire life. His parents were A.J. and Edith (Cade) Pilkinton. He graduated... View Obituary & Service Information

The family of Bob Pilkinton created this Life Tributes page to make it easy to share your memories.