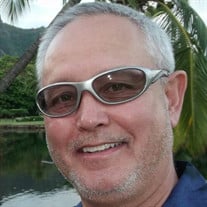 Bouke Armand Verkerk of Wenatchee, WA finished his race with Pulmonary Fibrosis on Monday, August 5th, 2019 at 9:30 am at the University of Washington Medical Center in Seattle, WA. Born in Jakarta, Indonesia on March 1st, 1952 to Albert Bouke and Frida Verkerk. Bouke was the younger of 2 brothers. The Verkerk Family decided to return to the Netherlands (Holland) in 1955 when Bouke was 3 years old due to increasing turmoil after Indonesia took its independence from the Dutch in 1945. The Verkerk family then immigrated to the United States in August of 1962 to make a better life and have more opportunities. They settled in Boise, Idaho. Bouke was a young schoolboy who only spoke Dutch and had to learn about the cultures and language of his new home. Bouke graduated from Boise High School in 1970 and later completed an Automotive Technician program at Boise State College in 1971. After college he moved to Wenatchee, WA to start a family. He married Toni Rotert at Ohme Gardens in Wenatchee and they have 2 children. Bouke was later divorced and never remarried, however, he had a long time relationship with his companion Linda “Lilee” Potts up until his passing. Bouke retired from the Chelan County P.U.D. after 29 years as a Fleet Services Manager, sadly, he did not get to enjoy the promises of retirement due to his illness. He would often dream of living life fully when he got his new set of lungs. Bouke enjoyed life to its fullest. He adamantly enjoyed the wind through his hair, thus his love of motorcycle rides and bicycling. He also believed deeply in humanity and the community. Always willing to help anyone. He also had a soft spot in his heart for animals and the humane society. Most importantly he loved and supported his two sons, Chris and Nick, and his six grandchildren, Austin, Kayden, McKenzie, Addisyn, Caleb, and Brayden. He is survived by his sons Chris (Julie) Verkerk & Nick Verkerk and 6 grandchildren; Austin Foster, Kaden Verkerk, McKenzie Verkerk, Addisyn Verkerk, Caleb Verkerk and Brayden Verkerk. He is preceded in death by his Mother Frida Verkerk, Father Albert Bouke Verkerk, and his Brother Frans Daniel Verkerk. Celebration of life will be held Saturday, August 24th, 2019 2:00 pm at Saddle Rock Presbyterian Church 1400 S. Miller St, Wenatchee, WA. Reception to follow at Columbia Valley Brewing, 538 Riverside Dr, Wenatchee, WA. In Lieu of flowers, Bouke requested donations be made to the Wenatchee Valley Humane Society http://www.wvhsremembering.everydayhero.com/us/in-loving-memory-of-bouke-verkerk.

Bouke Armand Verkerk of Wenatchee, WA finished his race with Pulmonary Fibrosis on Monday, August 5th, 2019 at 9:30 am at the University of Washington Medical Center in Seattle, WA. Born in Jakarta, Indonesia on March 1st, 1952 to Albert Bouke... View Obituary & Service Information

The family of Bouke A. Verkerk created this Life Tributes page to make it easy to share your memories.

Bouke Armand Verkerk of Wenatchee, WA finished his race with...