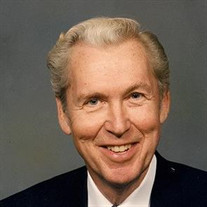 Bruce A. Gellatly, 92, was born in Wenatchee, WA to parents Lester and Janice Gellatly on July 15, 1927. His grandfather, pioneer John A. Gellatly, came to the valley in 1900. Bruce passed away quietly at his home on October 13, 2019 surrounded by loving family members. Bruce graduated from Wenatchee High School and Hill Military Academy, Portland, OR in 1945. He entered the Navy as a radio technician and served aboard the aircraft carrier U.S.S. Sicily. After the war, Bruce attended the University of Washington where he met his future wife Janet Rae Shofner. He pledged Beta Theta Pi fraternity and graduated in 1951 with a degree in Business. Bruce was a member of the University of Washington swim team. The college sweethearts were married in 1950 and celebrated their 69th wedding anniversary at Lake Chelan this past August. The couple returned to Wenatchee in 1951 where Bruce joined his father, Lester, at Gellatly Agency, Inc., the family insurance business since 1900. Bruce stayed active in the family agency for over 59 years, retiring in 2010 at the age of 82. Bruce was actively involved in the community. He joined the Wenatchee Exchange Club in 1951 upon arrival. As a past President he was a recipient of the “Key Man” award. Bruce was Vice-President of the Junior Chamber of Commerce in the 1950’s and was joint founder of the Wenatchee Construction Council. He was also President of the Wenatchee Contractor’s Association as well as the Wenatchee Insurance Agents Association. Wenatchee did not have a city pool in the 1960’s. Bruce and his wife Janet co-chaired the levy to build the Wenatchee Municipal Pool that you see today. He was Commodore of the Lake Chelan Yacht Club in 1970 and owned a mobile home on site for 10 years. He helped plan and build the Yacht Club’s first floating marina. Bruce was President of the Wenatchee Racquet & Athletic Club, serving as President during the building and completion of their indoor tennis and racquetball facility. He was a member of Saddlerock Evangelical Presbyterian Church throughout his married life and attended regularly while he was still able. Growing up, Bruce spent the summers with his family at their log cabin on Lake Wenatchee. He courted Janet on weekends and later they enjoyed lake activities with their five children. Bruce’s favorite retreat was his Lake Chelan cabin that he purchased in 1975. Bruce was an avid boater and fisherman. All his children as well as his 13 grandchildren learned boating skills and etiquette. The family acquired the same love for the lake that he possessed. All Bruce’s friends on the lake remember his 49 year old, 1969 Fiberform, the “G-Whiz”. Today the family cabin hosts many gatherings of friends and family all summer long. The younger generations have learned to waterski and wakeboard just as their parents did. Early in his marriage Bruce and Janet would go salmon fishing on Puget Sound. “Bompa”, as the grandchildren called him, loved the opening day of fishing when he would take the grandchildren fishing to “catch their limit” of trout at Wapato Lake above Lake Chelan. One of his fishing highlights was catching a 270 pound Marlin with close friend Jim Goodfellow in Hawaii. Bruce loved to hunt with his Springer Spaniel “Peppy” and was a 30-year member of the Royal Gun Club in Othello. He also enjoyed photography and took many wedding photos and pictures for the Wenatchee World as well as for family and close friend’s gatherings. Bruce played the drums, enjoyed music and loved to dance. The great-grandkids still enjoy playing his complete drum set in the basement of their home. Bruce and Janet were co-founders of the Centipede Dance Club, staying active in the club for 50 years. Bruce always enjoyed a game of Bridge with friends. He and Janet formed a couple’s bridge club in the 1950’s that also lasted 50 years. Bruce was preceded in death by his parents, Lester and Janice Gellatly, a brother Gordon Gellatly, sister Sandra Fenner, infant grandson Brandon Allison and infant great-grandson James Allison. He is survived by his wife Janet, one son, Marvin Gellatly (Elly) and 4 daughters, Karen Heminger (Marc), Lynne Faulkner (Cody) all of Wenatchee, Julie Allison (Ron) of Issaquah, and Debbie Walter (Dave) of Yakima. “Bompa” was very proud of his 13 grandchildren; Sean & Alex (Carol) Gellatly and Rachel Hildahl (Seth); Jeff Heminger (Susan), Kami Copenhaver (Tyler), and Laura Lammert (Gregory); Cory, Conner & Makenna Faulkner; Jace (Christine) & Kaley Allison; and Bryce (Julianna) & Nathan Allison. Bompa also had 12 great-grandchildren; Emma, Elliott, Eliza, Oliver & Annika Heminger; Owen & Bentley Copenhaver; Caden, Haley & Micah Lammert; Sawyer Hildahl and Isabelle Gellatly. A Memorial Service will be held on November 23rd at 1:00 at Saddlerock Evangelical Presbyterian Church. Please visit the Jones and Jones – Betts Funeral Home website for more information. Memorial donations may be made to the Wenatchee Exchange Club Youth Program, Saddlerock Evangelical Presbyterian Church “FIT” Building Fund, or the Lake Chelan Yacht Club.

Bruce A. Gellatly, 92, was born in Wenatchee, WA to parents Lester and Janice Gellatly on July 15, 1927. His grandfather, pioneer John A. Gellatly, came to the valley in 1900. Bruce passed away quietly at his home on October 13, 2019 surrounded... View Obituary & Service Information

The family of Bruce Gellatly created this Life Tributes page to make it easy to share your memories.

Bruce A. Gellatly, 92, was born in Wenatchee, WA to parents Lester...