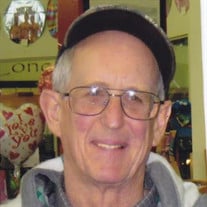 Oil Can Charlie "pinched off” (in his words) at home in Wenatchee, Washington on May 30, 2020 due to complications of multiple myeloma. Affectionately known as Chas, Chuck or Charlie, Charles R. Aumell was born June 25, 1941 to Stanley and Angela Aumell, the 3rd of eleven children. He attended Whitman Elementary, HD Ellison Junior High and graduated from Wenatchee High School, class of 1959. He then earned an associate degree from Wenatchee Valley College and shortly thereafter entered the US Navy serving this county aboard the destroyer USS Goodrich (DD 831) as a Torpedo Mate Petty Officer 2nd Class, deploying on cruises to the Caribbean and to the Mediterranean Seas. Mustering out in 1968, Charlie went back to work at the Wenatchee Daily World in the pressroom and circulation (he had also been a paperboy for the Daily World in the 1950's). He then graduated from Renton Vocational Technical Institute where he calibrated his mechanical skills. In pursuit of wild game hunts and choice fishing, in 1974 Charlie moved to Helena, Montana where he found his outdoor heaven. He secured work for several area automotive companies as a "wrench" in their maintenance department, then ventured to open his own, ultimately successful repair shop, Charlie's Auto Repair (motto: “We repair everything from bugs to bunnies”). Friday night therapy sessions at his shop were well attended by customers, friends and family. Cold beer, laughter and storytelling were featured, and Charlie developed a strong social network of lifelong friends. His shop was warmed by a wood fired stove and Charlie was continually making forays to the mountains, selecting and chain sawing trees to size, loading rounds into his pickup and axing them into appropriate sizes to feed the heating demands. Because of his generous spirit he warmed the hearth of many friends with his cut wood. A quiet but strongly philanthropic man, Charlie financially supported a multitude of charities, among them the Yellowstone Boy's and Girl's Ranch, the Farm in the Dell, St. Andrews Catholic School, Boy's Town, St. Joseph's Catholic School, veteran's organizations as well as cemeteries and memorials. Charlie was also faithfully religious, attending weekly mass at St. Cyril Methodious in East Helena, Montana and at St. Joseph's Church in Wenatchee, Washington where he returned to live with his sister Kas and brother-in-law Bruce in September of 2018. He is survived by his aunt Thelma Wolfe, and by siblings James, Gloria Pashinski, Fred (Camille), Kas (Bruce) Law, Mary (Mike) Mukai, John (Susie), Tom (Karen), and sister-in-law Mary (Aumell) Felice, and a multitude of nieces and nephews, and classmate and lifelong friend (#8 brother) Fr. Bob Erickson. Also survived by former wife Bunny Aumell, stepchildren Ellen, Karlene, and Steve, as well as grandchildren and great grandchildren. Our family would like to express our gratitude to Dr. Lexie Graham and her staff at Confluence Health for their aid in helping to keep Charlie at home and comfortable during his final days. The Holy Rosary will be recited on Thursday, August 27, 2020 at 7:30 p.m. at St. Joseph Catholic Church in Wenatchee. A Celebration of Life will be held Friday, August 28, 2020 at 11:00 a.m. in Wenatchee. With a reception to follow in Kuykendall Hall. In Lieu of flowers, you may make donations to The Yellowstone Boys and Girls Ranch Foundation P.O. Box 80807, Billings, MT 59108-0807; St Andrew Catholic School, 1900 Flowerre, Helena, MT, 59601; Sts. Cyril & Methodius Catholic Church, 120 W. Riggs E. Helena, MT 59635; St Joseph Catholic School, 600 St. Joseph Pl., Wenatchee, WA 98801.

Oil Can Charlie "pinched off&#8221; (in his words) at home in Wenatchee, Washington on May 30, 2020 due to complications of multiple myeloma. Affectionately known as Chas, Chuck or Charlie, Charles R. Aumell was born June 25, 1941 to Stanley... View Obituary & Service Information

The family of Charles R. "Charlie" Aumell created this Life Tributes page to make it easy to share your memories.

Oil Can Charlie &quot;pinched off” (in his words) at home in Wenatchee,...