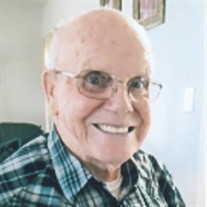 Charles (Chuck) Wilsey, 87, a long time resident of Wenatchee, passed away peacefully on Saturday, August 8th, 2020. Chuck was born in Loxley, Alabama to Murray & Minnie Wilsey on July 14th, 1933. He had spent his childhood years in Alabama & the Florida Panhandle until 1947, with his large family of 12 brothers & sisters. The family moved to Wenatchee, right next door to the Kelley family, where he met the love of his life, Margaret (Peggy) Kelley. They were sweethearts all through school & were married on August 14th, 1954. Chuck served in the US Army & then in the National Guard & made many memories. In 1960, he started his long career as a Wenatchee Police officer till he retired in 1985. Chuck and Pegs house of 62 years was always filled with family, friends, kids & lots of love. Whether it was barbecues, reunions, or holidays, everyone loved being together at their home & many generations of cherished memories were made. He was preceeded in death by his wife Peggy, father Murray, mother Minnie, brothers Emmitt, Oscar, James, Conrad, John, Wayne, Gail & sisters Ada, Dorris, Louise and Peggy. He is survived by his brother Thomas(Ozzie), son Jeff Wilsey, daughters Jenny Blase & husband Dan, Jill Blankenship & husband Kevin. Grandchildren Crystal, Maranda, Aryn, Lauren. Great grandchildren Brielle, Rylee, Liam and Archer. Service to be done by Jones & Jones, on a date yet to be determined due to Covid-19. Once arrangements are made, they will be posted to Chuck's Facebook page.

The family of Charles "Chuck" Wilsey created this Life Tributes page to make it easy to share your memories.