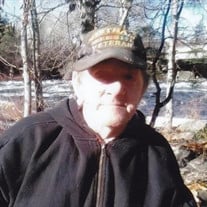 Chuck Victor “Shorty” Donnatelli, age 85, of Wenatchee, went to be with his Lord and family in heaven after a long battle with Alzheimer’s Disease. Chuck was born on October 2, 1935 in Walnut Grove, California. The youngest of seven children, he was raised mostly by his dad in Mesa, Arizona, and had fond memories of his days on the ranch. He graduated from Mesa High School and later enlisted in the U.S. Army, serving two tours in Viet Nam. When he returned to civilian life, he went to college and studied horticulture/floral design, which became a life-long passion. He worked different restaurant jobs, as well as retail, but his favorite memories were traveling around the country working with truckers. Though he had many work experiences, his greatest joy was found in creating beautiful yard landscapes. Chuck settled in Wenatchee more than 40 years ago, because of his love of the mountains nearby. In 1985 he met Betsy McGee, the love of his life, and shared many wonderful years together. He had a personal relationship with his Lord and Savior Jesus Christ, and studied his Bible daily, often sharing his faith with others. He loved children and was known as “grandpa” by the neighborhood kids. He was always willing to help those in need and enjoyed spending time working alongside a friend or neighbor. Much of his time was spent playing baseball/softball, either with the Special Olympics team, the Wenatchee Tigers, or the Golden Age Softball team. If you knew Shorty, you knew he played to win! He remained active until his health deteriorated in his later years. Life was not easy for Chuck, but his relationship with Betsy, along with his faith in Jesus, helped see him through. He will be sadly missed by those who knew and loved him. He was preceded in death by his parents, brothers and sisters, and his son, Chuck William Donnatelli, Jr., as well as his faithful dog, Duke. He is survived by Betsy McGee of Wenatchee; his son Joseph A. Donally of Lodi, CA; his daughter, Carol Ann Shockley, also of Lodi, CA; his son Dean Donally of Tellico Plains, Tennessee; 11 grandchildren and several great-grandchildren. He is also survived by many Wenatchee friends/neighbors who were like his family: Lorena Hernandez-Pulido and kids (Max, Mateo, and Milo), Dalia Hernandez and kids (Amy, Hector, and Daniel), Amelia Hernandez-Barragan and kids (Orlando and Natalie), Liliana Hernandez and kids (Aldo, Chitos, Julia, and German), and Armondo Hernandez Jr. Many thanks to the Cashmere Care Center, attending Hospice nurses, and Central Washington Hospital for their loving care to Chuck during his illness.

Chuck Victor &#8220;Shorty&#8221; Donnatelli, age 85, of Wenatchee, went to be with his Lord and family in heaven after a long battle with Alzheimer&#8217;s Disease. Chuck was born on October 2, 1935 in Walnut Grove, California. The youngest... View Obituary & Service Information

The family of Chuck V. "Shorty" Donnatelli created this Life Tributes page to make it easy to share your memories.