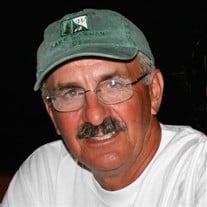 David O. Dorey died Saturday, June 8, 2019 after a fight with mesothelioma. Born March 6, 1944 to Ted and Bernice (Bink) Dorey he was the second of five children. He attended Lincoln Elementary, H.B. Ellison Junior High, Pioneer Junior High and Wenatchee High School, graduating in 1962. He was definitely not the valedictorian but was very popular with an amazing gift of gab, and had a million friends. His claim to fame was playing the guitar in a rock and roll band called the Apple Rockers and singing Ricky Nelson songs with his eyes closed. The band was mediocre but had a huge following because they were the only band around. It was when he played in that band that he was noticed by a younger girl, Becky, and somehow they met and she ended up being his wife for nearly 52 years. Her mother thought he was too old for her so he arranged for a younger friend of his to pick her up for their dates. But Dave, being Dave, won the hearts of her family once they got to know him. Dave had many passions. He was definitely a car guy. He would blow up an engine and put in a new one. Likewise with clutches—10 times in one car alone. He owned everything from a ’55 Chev to lastly a 2001 Mustang convertible. He promised the Mustang to all four of his grandchildren and thought it was hilarious. He was an avid bird hunter and had a long line of German Shorthair pointer hunting dogs and all the hunting stories to go with it. Golf was another frustration that he put himself through and he played left handed. He built one house from the ground up and remodeled his current home that they inherited from Becky’s grandmother. He was the king of jury rigging—there was nothing he couldn’t fix even if it took duct tape. Early on Dave worked for his father in the family masonry business and earned his journeyman’s brickmason credentials. He was hired by Alcoa in 1968 as a bricklayer and was there for 32 years before taking an early retirement at the age of 56. Dave and Becky had two sons, and they were his heart and soul. Dave coached them in all their sports until they required coaches who knew more than him. When the soccer craze came to Wenatchee he coached a team of 6-year-old boys without knowing a single rule of soccer. He was the best dad imaginable, never missing anything in which they participated; a trait that he passed on to them for their own children. Summers at Lake Chelan were a ritual, and although fishing, boating and waterskiing were favorites for him, he was truly his happiest doing remodeling projects on the family cabin. In fact, Dave without a project of some kind was a sorry sight. Dave is survived by his wife, Becky, his two sons, DJ (Natalie) and Garr (Amy) and four grandchildren—Grace, Nolan, Joe and Samantha Dorey. His grandkids were the pride joy of his life. He teased them relentlessly, told them jokes not allowed by their parents, and because he was Dave he got away with all of it. Dave is also survived by his brothers Curt and Bob Dorey and sister Priscilla Minster. He was preceded in death by his parents and older brother, Denny. At Dave’s request there will be no service, but a celebration of his life will be held at Pybus Market on Friday, June 28, from 1:00 to 4:00 pm. Please join us to celebrate the life of this one of a kind guy. The family sends a huge thank you to the Hospice care team who helped us through the last few months of his life—such an amazing organization. Thanks also to the hospital nurses who cared so wonderfully for him the last week of his life. An avid animal lover, Dave would love donations in his name made to the Wenatchee Valley Humane Society.

The family of David O. Dorey created this Life Tributes page to make it easy to share your memories.