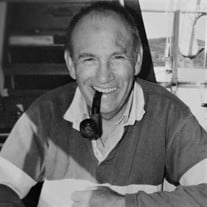 David O. Harris, dear son of Orin and Eva (Fasso) Harris, beloved husband of the late Theresa Marie (Kerns) Harris, and adored father of six daughters and one son, passed away on the evening of March 7, 2022, at age 88. He was surrounded by... View Obituary & Service Information

The family of David O. Harris created this Life Tributes page to make it easy to share your memories.