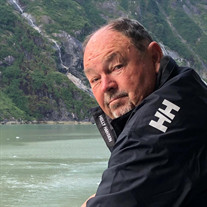 David B. "Dave" Mathews was born on July 20, 1948, to Melvin and Laura Mathews in Wenatchee, WA. His early years were spent in Manson, WA, before moving to Wenatchee. Dave graduated from Wenatchee High School, in 1966, before enlisting in the U.S. Marines, in 1968, where he served with honors, until 1970. After discharge, he returned to Wenatchee and married his childhood love, Becky Mathews, on June 12, 1970. He also began his firefighting career, in 1970, for Chelan County Fire District #1. Dave and Becky set their roots in Wenatchee, where they raised two sons, Terry and Jason. During his career, Dave raised through the ranks at Fire District 1, where he served as a firefighter, Training Chief, Assistant Chief, and ultimately, Fire Chief, before his retirement, in 2003. He became a proud grandfather in 1998, 2000, 2003, 2015, and 2016. Dave happily transitioned his public service to service for his family, where he proudly served as a husband, dad, and grandfather. Dave was honored to serve in the military, loved riding his Harley motorcycle, spending time fishing with his sons and grandkids, going to the races with family, loved spending time on cruises with his wife, and continued his service with the Fire District in a volunteer role, through 2021. He was an awesome dad and grandfather, whether it was watching soccer games, dance, or a Wednesday lunch, he was committed beyond measure to his family. One of many highlights was helping to coach tee ball alongside his son, Jason, for his grandson Max's T-ball team. His biggest honor was that his two sons followed his path into public service, serving as both a Chelan County fireman, (Terry), and a Chelan County Sheriff's Deputy, (Jason). He was the cornerstone of the family and lead with honor, compassion, patience, and no matter the situation, was alway available for family and friends. David is survived by his wife, Becky; sons: Terry (Kathleen) and Jason (Katie); grandkids: Haley, Olivya, Max, and Piper; and sisters: Kathy Hampton (Jim) and Pam Ellis (Doug). He was predeceased by father, Melvin Mathews; mother, Laura Mathews; grandson, Colton Mathews; and daughter-in-law, Jenny Mathews. Service will be provided by Grace City Church at 10am on Wednesday, July 7, 2021, followed by a graveside interment at the Wenatchee City Cemetery. In lieu of flowers, please provide donations to Chelan County Fire District #1 volunteer association, 731 N. Wenatchee Ave., Wenatchee, WA, 98801, or Leukemia and Lymphoma Society, at https://givenow.lls.org/.

David B. "Dave" Mathews was born on July 20, 1948, to Melvin and Laura Mathews in Wenatchee, WA. His early years were spent in Manson, WA, before moving to Wenatchee. Dave graduated from Wenatchee High School, in 1966, before enlisting in the... View Obituary & Service Information

The family of David B. Mathews created this Life Tributes page to make it easy to share your memories.