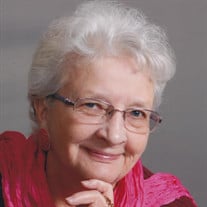 Devonna Ann "Dee" (Hansen) Schubert, 86 years old, of Wenatchee, WA, passed away peacefully with members of her loving family by her side, on July 3, 2021, after an extended gastrointestinal illness. She was born to Carroll and Viola (Larson) Hansen on February 1, 1935, in Stanley, ND. Dee grew up in the Stanley community, attending school and graduating valedictorian from Stanley High School, in 1953. On August 30, 1953, in Stanley, she married Donald K. "Don" Schubert, also from Stanley. It was there, in Stanley, that they made their first home. Dee accompanied Don, who was drafted into the U.S. Army on November 2, 1953, to Ft. Dix, NJ, then to Ft. Benning, GA, where their son, Nick, was born in October of 1955, and they continued to live there, until Don's honorable discharge, on November 2, 1955. The Schubert family returned briefly to North Dakota and then moved to Seattle, WA, in September of 1956, where both Don and Dee found gainful employment, saw the birth of their daughter, Sandy, in April of 1957, and continued to work, live, and raise their family, for the next 20 years. Devonna worked in accounting for West Coast Airlines, Hughes Airwest, Alaska Airlines, and then, Palmer G. Lewis Company, Inc. In 1978, she and Don moved to Twenty-five Mile Creek at Lake Chelan, WA, where they operated the campground and concession for the state parks department through the 1980 season. They then returned to Seattle, where Dee worked once more for Alaska Airlines, until retiring in 1990. In June of that year, Dee moved to Cashmere, WA, where her sister, Beverly Bryan, also lived, to join Don in construction of their retirement home. After they completed the house, Dee went to work for Washington Belt and Drive in Wenatchee, WA, and then retired fully and moved to East Wenatchee, in 1992, after Don suffered a heart attack. In 1994, following the passing of Don, her husband of over 41 years, Dee moved to and settled in Wenatchee, WA. Dee was a jubilant member of the Wenatchee Church of the Nazarene, an active volunteer in her community, a loving caregiver to her grandsons, Treat and Price, during their preschool years, and a beloved wife, mother, sister, auntie, grandmother, great-grandmother, neighbor, and friend. She was a blessed child of God. Devonna was preceded in death by her parents, Carroll and Viola; husband, Don; and her sister, Beverly. She is survived by Nick Schubert, her son, and his children: Donna, Treat, and Price; her daughter, Sandy (Schubert) Gurule and Sandy's son, Jason and his daughters: Popuri and Petal; and an extended family member, Caren Barnes, and her son, Tom. Thank you to the Hospice nurses and the staff at Central Washington Hospital for the compassionate care and respect they gave to Dee in her final months and days.

Devonna Ann "Dee" (Hansen) Schubert, 86 years old, of Wenatchee, WA, passed away peacefully with members of her loving family by her side, on July 3, 2021, after an extended gastrointestinal illness. She was born to Carroll and Viola (Larson)... View Obituary & Service Information

The family of Devonna "Dee" Schubert created this Life Tributes page to make it easy to share your memories.