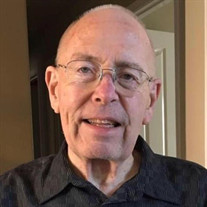 On the morning of October 1st, 2021, Donald LeRoy Hussong, age 77, went home to be with his Lord and Savior, Jesus Christ. Donald L. Hussong was born December 19, 1943, in Rapid City, South Dakota to Roy L. and Hazel (Cole) Hussong. He received his education there, graduating from high school in 1962. He attended Anderson College, in Anderson, Indiana from 1963-1965. During this time he sold shoes at J.C. Penney Store and was later the night assistant manager at McDonald’s. He transferred to Warner Pacific College in Portland, Oregon in 1965, graduating with a Bachelor of Theology degree in 1969. He then attended Western Evangelical Seminary in Jennings Lodge, Oregon, graduating in 1973 with a Master of Divinity degree. He married Marjorie K. (Kathy) Cutshall on August 3rd, 1968 at the Woodstock Church of God in Portland, Oregon. They made Portland their home while he finished his schooling. During that time he sold women’s fashion shoes at the Meier and Frank Store in the Lloyd Center Mall. In July of 1974 they moved to East Wenatchee, Washington, where he became the pastor of the First Church of God. He served there until January, 2005. During that time he was employed part time by Betts Funeral Service and also Jones & Jones-Betts in Wenatchee, Washington. While working there he became a licensed apprentice funeral director. He also helped occasionally at Telford’s Chapel of the Valley in East Wenatchee, Washington. He served many families by officiating over 600 funerals and over 250 weddings. From 1988 until 2008 he and Kathy worked part time as janitors at Columbia Cinema in East Wenatchee. He served in various positions in the local ministerial fellowship over the years. He also served in various positions in the ministerial fellowship of the Pacific Norwest Association of the Churches of God, East Region (PNA East). He served as chairman of the Credentials and Church Relations Committee for the (PNA East) for two terms. He was an avid bowler on various leagues in Wenatchee and East Wenatchee and served two terms on the Board of Directors of the Wenatchee Bowling Association. In June of 2015 he and Kathy moved to Meridian, Idaho to be near their children and grandchildren, whom he dearly loved. He again took up bowling and joined the Happy Hour League on Tuesday evenings with his daughter, Michelle. And for fun he and Kathy would bowl every Monday and Thursday mornings with friends. He attended Valley Shepherd Church of the Nazarene. He is survived by his wife, Kathy, two daughters, Julie Berggren of Meridian, Idaho, and Michelle Kjosness of Meridian, Idaho and three grandchildren, Sophie and Ben Berggren and Liam Kjosness. Memorials may be made to the Parkinson’s Foundation, 200 SE 1st St., Suite 800, Miami, FL 33131 or the Boise Rescue Mission, 308 So. 24th, Boise, ID 83702. Local arrangements are under the direction of the Nampa Funeral Home, Yraguen Chapel, 415 12th Ave. So. – 208-442-8171 with a graveside service at Evergreen Memorial Park in East Wenatchee, WA October 23, 2021 at 10:30 a.m. under the care of Jones & Jones-Betts Funeral Home, in Wenatchee, WA.

The family of Donald LeRoy Hussong created this Life Tributes page to make it easy to share your memories.