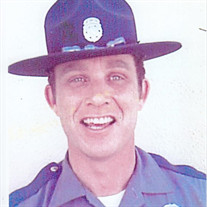 Born in South Dakota in 1935 to Bernard and Evea Koehler, Don had 7 brothers and 4 sisters. He enjoyed the usual High School activities of football, baseball and attending every dance with a favorite young lady, often double dating with one of his siblings. They were a close family and everyone knew not to show up late for dinner. Mom was a great cook and there would be no leftovers! After High School, Don joined the Navy in 1953, and spent the next 5 years as a Hospital Corpsman in the 1st Marine Division at Camp Pendleton. He was told “from this day forward you are a Marine, here is your uniform, wear it proudly”. He was very proud to be a Marine. Upon leaving the military Don moved to Washington State to be near two of his brothers and his father and his beloved nieces and nephews. He missed his family. He joined the Washington State Patrol in 1961 and spent the next 32 years as a patrolman ending his career as a Sergeant in 1993. His first assignment was in Chelan where he gained an understanding of police work and made many lifetime friends. Don felt honored to be a member of WSP. He was also a volunteer fireman and felt a strong kinship with friends at the Fire Dept. and with Chelan County Police Dept. as well. He loved building and working with tools and often helped friends with home repairs, adding a room or garage. When he decided to build his own house he called them all to come and help and every one of them did! He met the love of his life, Pat, in 1972 while assigned to Wenatchee. They married a year later. Don was a very special guy, he loved to be contrary and could frustrate you and make you laugh in the same moment. He was always generous and yet tightfisted. He drove family and friends crazy and yet he was well known for his great big compassionate heart. He did not like to show it but he could be overwhelmingly kind. He will be missed but never forgotten. Don is survived by his wife, Pat, and daughter Cindy Koehler Ray (Roger Ray), of Junction City OR; granddaughter, Morgaine Koehler Clarke of Springfield OR; 2 grandsons, Niko Oleyar and Benji Oleyar of Poulsbo WA; sister-in-law, Marie Koehler of Monroe; nieces and nephews, Nan, Sis, Janet, Jamie, Kay, Andy, Pete, and Larry Jr.; and his brother, Tom (Sandy) and sister, Ruthann in South Dakota and numerous nieces and nephews across the US. To the family's great sorrow their youngest daughter, Valerie, passed away in September this last year. Cancer took the life of a young mother of 2 sons and left many friends and cousins in deep sorrow. Sometimes a bright star burns out too soon. She graduated from EWU, joined the Peace Corps (Tanzania), graduated from Seattle University and worked for the Navy as an Environmental Scientist. She loved her sons, Niko and Benji, more than life and spent many hours playing and having marshmallow roasts and camping with them. She had many beloved friends and cousins so very dear to her. Many were near at her time of death. The Hospice worker said "When I die, I want to be just like that...surrounded by a sea of women!" It is said that Joy and Sorrow walk the same sacred path. We take Joy in the privilege of knowing these two extraordinary members of our family and in loving them AND in knowing that they loved us! We are so very sorry for our loss of them in our lives. They will always be well remembered and treasured. We plan a Celebration of these two lives on the 30th of October at Faith Presbyterian Church (200 S Kentucky) in East Wenatchee at 1pm. Because of Covid concerns, guests are asked to wear a mask and to thoughtfully distance as we gather.

Born in South Dakota in 1935 to Bernard and Evea Koehler, Don had 7 brothers and 4 sisters. He enjoyed the usual High School activities of football, baseball and attending every dance with a favorite young lady, often double dating with one... View Obituary & Service Information

The family of Donald P. Koehler created this Life Tributes page to make it easy to share your memories.

Born in South Dakota in 1935 to Bernard and Evea Koehler, Don...