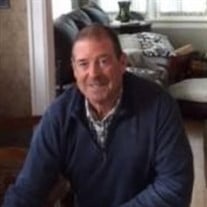 Donald (Don) Elmer Van Winkle (68) of Monitor, WA, passed away March 5, 2020, following a sudden unexpected cardiac event. He died in the hospital in Wenatchee, Washington with his family gathered around him. Don was a devoted husband, father, grandfather, brother, uncle, and friend. Born in Wenatchee, WA, in 1951 to Elmer and Mary Van Winkle, Don joined brothers Virgil and Jerry and sister Sharon. The family farm and home was on the banks of the Columbia River, South of Entiat. The building of Rocky Reach Dam caused the family farm to be relocated to Orondo. Don attended school in Entiat before Elmer and Mary moved their family to Monitor where Don attended Monitor Elementary School and then Cashmere schools, graduating from Cashmere High School in 1969. After graduation Don spent two years at Wenatchee Valley College. Don met the love of his life, Pamela Ann Bauer, at the lake cabin of mutual friends in 1976. After making it clear to his partner-in-crime and life-long friend, Kelly Griffiths, that she was off limits, Don and Pam became inseparable and married six weeks later at the home of friends in East Wenatchee. When Don found his beloved bride he also gained a daughter, Fona. A short time later they welcomed a son, Beau, and the family was complete when another daughter, Shelby, was born. Together they raised their three children, living first in Orondo, later moving to East Wenatchee, and finally settling into the Van Winkle family home in Monitor. Don dedicated much of his life to agriculture and held many positions in the fruit industry throughout the years. In early 2017 he retired from Stemilt Growers where he had spent countless hours as a field man assisting farmers all around the Wenatchee Valley. For many of the growers he supported Don was more than just a knowledgeable voice guiding them through the intricacies of farming, he became a friend they could turn to for anything at any time. He had a strong work ethic and a big sense of humor. Don was most passionate about his family, his friends, his animals, and his work. Don tenderly cared for his elders while he joyfully participated in the lives of his grandchildren. Annual trips to Hale Napili on Maui with his wife Pam were a necessity in Don’s strategy for living well and as a result they were blessed to be a part of what came to be known as the ‘Marigold Group.’ Don’s true legacy is in the beautiful family he and his wife Pam raised together. Don was preceded in death by his parents, Elmer and Mary Van Winkle, his brother Jerry Van Winkle, three infant siblings, Solomon Elmer, Shirley and Mary Ann. He was also preceded in death by his in-laws Clarence (Nance) and Gerry Bauer, a brother-in-law Patrick Bauer and a sister-in-law, Constance (Connie) Bauer Cooper. Don is survived by his wife Pam Van Winkle; children: Fona Mathena (Josh), Beau Van Winkle (Kayla), Shelby Williams (Kevin); and grandchildren: Dillon, Dalton, and Demary Sugg, and Maya Mathena; Owen, Emersen, and Cooper Williams; Mary, Ellie, and Taylor Van Winkle. Don is also survived by his brother Virgil Van Winkle (Sue), sister Sharon (Ron) Harnden and sister-in-law Yvonne Van Winkle; and brother-in-law Kenneth Cooper, and brother-in-law Mike (Sandy) Bauer. He is also survived by many cousins, nieces and nephews. No story about Don’s life would be complete without mention of the bonds of brotherhood he felt with his closest friends—they know who they are. Much like the many hats Don wore—husband, father, grandfather, farmer, and animal lover to name a few—his friends came into his life at different times from different places—childhood, work, travel, or working out—but we know it was his great fortune to share many adventures and laughs and much love over the years with those he counted in his blessings. Friends and family are grieving a good man gone too soon. Because of dad’s love of animals, if you so desire, the family would like to suggest donations in dad’s name, in lieu of flowers, to either the Wenatchee Valley Humane Society or Alatheia Therapeutic Riding Center. Although we were planning to hold a memorial service on March 21, given the current public health climate and day-to-day changes our communities are facing we have decided to postpone to a later date.

Donald (Don) Elmer Van Winkle (68) of Monitor, WA, passed away March 5, 2020, following a sudden unexpected cardiac event. He died in the hospital in Wenatchee, Washington with his family gathered around him. Don was a devoted husband, father,... View Obituary & Service Information

The family of Donald E. Van Winkle created this Life Tributes page to make it easy to share your memories.