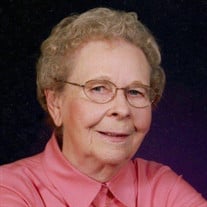 Dorothy Elaine Dennis passed away on January 23, 2022, at the age of 93. She was born at St. Anthony's Hospital in Wenatchee, WA, on February 17, 1928, and was the youngest of five children born to George Weber and Katherine (Amend) Weber of Quincy, WA. Dorothy grew up on the family farm and attended schools in Quincy, WA, graduating from Quincy High School in 1945. After graduation, Dorothy took business classes at Central Washington College of Education prior to moving to Wenatchee, WA, where she worked in the office of the Chelan County Engineer before taking a position as the bookkeeper at Craftsman Printing. One day, on her lunch break, Dorothy watched a parade in downtown Wenatchee featuring a group of recently discharged WW II combat veterans. Dorothy's attention was drawn to a handsome young soldier whose name (she found out later) was Jack Dennis. Skipping ahead a few years, Jack and Dorothy were married at Grace Lutheran Church in Wenatchee, WA, on February 27, 1949. After the birth of their first child in 1953, Dorothy spent most of her time as a homemaker and mother, but she rejoined the workforce in 1972, in order to assist her husband, Jack, in operating their business known as Fred Siemon Shoes. Each of Dorothy and Jack's children worked part-time at the family shoe store while growing up, which Dorothy appreciated because that meant she could work at the family store and keep an eye on her kids at the same time. Dorothy and Jack continued to operate the shoe store until they retired in 1990. After retirement, Dorothy and Jack made many visits to their children and grandchildren and took various pleasure trips, but what Dorothy enjoyed most was spending time with Jack at their home in Wenatchee. Dorothy loved working in her flower beds and vegetable garden and she also loved to cook, bake, and sew. Nobody invited to dinner at Dorothy's house ever left hungry. Every year, she and her two sisters enjoyed a friendly rivalry as to who could make the most varieties of Christmas cookies and all those extra cookies were greatly appreciated and happily eaten by Dorothy's children, grandchildren, and great-grandchildren, not to mention her nieces, nephews, neighbors, church friends, mail carrier, paper boy, garbage hauler, etc. She was a long-time member of Grace Lutheran Church and, every winter for many years, she enjoyed joining other women at her church as they made dozens of quilts to be donated to Lutheran World Relief. One of her favorite days each year was Quilt Sunday, where dozens of colorful newly-made quilts were displayed in her church before being boxed up and shipped to those in need. Dorothy and Jack enjoyed nearly 54 years of marriage before his death in 2003. Dorothy was preceded in death by her parents; sisters: Cleda Scaife and Elsie Logan; brothers: Lawrence and Eldon Weber; and by a niece. She is survived by her three children: Greg Dennis (Mary) of Vancouver, WA, Terri Brown (Jeff) of Kent, WA, and Scott Dennis (Kathy) of Redmond, WA; eight grandchildren: Emily Schei (Erik), Megan Dennis (Mark), Adam Brown, Caitlin Dennis, Andrew Brown (Tanya), Geoff Dennis, Brian Dennis, and Hannah Dennis; three great-grandsons: Hudson Ohlig, Jackson Schei and Oliver Schei; as well as many nieces, nephews, and cousins. Dorothy's family wishes to sincerely thank the many friends and neighbors who provided assistance and kindness to her during her long life. A Graveside Service will be held at the Wenatchee City Cemetery, 1804 N. Western Ave., Wenatchee, WA, on Saturday, March 19, 2022, at 10:00 a.m. In lieu of flowers, please make a donation to your favorite charity.

Dorothy Elaine Dennis passed away on January 23, 2022, at the age of 93. She was born at St. Anthony's Hospital in Wenatchee, WA, on February 17, 1928, and was the youngest of five children born to George Weber and Katherine (Amend) Weber of... View Obituary & Service Information

The family of Dorothy Dennis created this Life Tributes page to make it easy to share your memories.