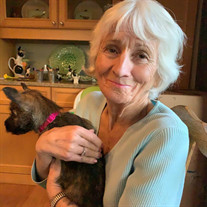 Dorothy (Dottie) France, 77, of Wenatchee, WA, passed away on December 24, 2020 at home surrounded by her loving family. Dottie is survived by her sister, Rosalie Kirkeby; niece, Lisa Kirkeby; nephew, Chris Kirkeby; brother, Elvin Bolton; nephew, Alex Bolton, his wife Amy Bolton, and their family; son, Robert Newell; daughter and son in law, Deborah and Jonathan Briggs; grand-daughter, Amanda Brack, her husband, Josh Brack, and their daughter, Lucy Brack; cousin, Dolores Buels; step-son and daughter in law, Ron and Teresa France, and their family; and step-son and daughter in law, Kevin and Loretta France, and their family. She is predeceased by her husband, Ron France. Dottie was born in Kellogg, ID, on December 31, 1942 to Abner and Jennie Bolton. She was the middle child of three siblings with older sister Rosalie and younger brother Elvin. Dottie married Bob Newell in June 1963. They welcomed two children, Deborah and Robert. Dottie enjoyed a long career and calling as a nurse, in Spokane, WA, and Couer d’Alene, ID, caring for and loving others with her whole heart. In April 2006 she married Ron France and moved to Eureka, MT. They enjoyed many adventures over their years together, wintering in Arizona, and spending lots of time with friends and family. After Ron’s passing in 2018, Dottie moved to Wenatchee, WA, to be near her daughter. Dottie loved everyone, she never met a stranger. She was a caretaker at heart and treated every person she encountered with dignity and kindness. Dottie had a curious spirit and loved to learn. She was an avid reader, working at a bookshop during nursing school and regularly visiting the library. She loved the outdoors and enjoyed camping, fishing, and hiking. She always wanted to explore the next corner to see where it led. When Dottie wasn’t working or outdoors, she was volunteering for numerous charitable organizations. She touched many people’s lives by her love and generosity of spirit. Dottie had a deep faith and was always active in church. She was a member of the Church of God in Eureka, MT, and the Brethren Baptist Church in Wenatchee, WA. In her last months, she received much comfort by watching the Catholic Channel, EWTN. Dottie will be deeply missed by her friends, family, and all who had the privilege of knowing her. Memorial donations/in lieu of flowers may be made to Sjogrens Foundation.

The family of Dorothy "Dottie" France created this Life Tributes page to make it easy to share your memories.