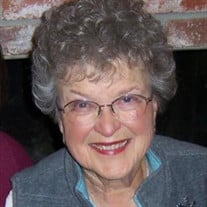 Dorothy Claire Rogers (Nicholson) 97 of Cashmere, Washington, passed away peacefully on Thursday, December 2, 2021, at Cashmere Post Acute. She was born on March 12, 1924, to Daniel and Claire Nicholson of Peshastin, Washington. She graduated from Peshastin High School in 1942, and reigned as “Princess Peshastin.” Dorothy received her teaching degree from Central Washington College of Education (now Central Washington University) in 1946. Her legendary teaching career began the same year in Colfax, Washington. In the early 1960’s, she joined the staff at Peshastin-Dryden Elementary where she taught 4th grade. “Mrs. Rogers” retired from the classroom in 1991. She famously kept scrapbooks documenting her teaching days in the car so she could reminisce with former students when she ran into them throughout the Valley. A topic of conversation during these run-ins was sure to involve Mrs. Rogers’ innovative projects, “The Restaurant” and “Bellevue Exchange.” On August 18, 1946, Dorothy married Lee Maurice (“Maury”) Rogers. The couple moved to Cashmere where they raised their three children Tom, Jim, and Janis. Maury and Dorothy were active members of the Cashmere United Methodist Church and supporters of local athletics. After retirement, Grandma Dorothy was involved in her grandkids’ many activities including dance, athletics, and theater. She enjoyed traveling to Prince Edward Island to visit relatives and accompanied brother Don to his Navy reunions throughout the country. She was a faithful shopping companion and organized yard sales that were reminiscent of a department store. She was known for her kindness, a hot thermos of coffee in hand, and her trademark smile with a twinkle in her eye. Dorothy is survived by her son, Tom Rogers and wife Kate of Wenatchee; her son-in-law, Brett Drescher of Orondo; four grandchildren, Aaron Rogers and wife Laura; Jessica Griffin and husband Nathaniel; Kacey Roberts and husband Zach; and Allison Cooper and husband Isaac; and five great grandchildren, Zachery, Samantha, Brianna, Stasi, and Nathaniel. She was preceded in death by her parents, Daniel and Claire Nicholson; brother, Donald Nicholson; husband, Maury Rogers; son, James Rogers; and daughter, Janis Drescher. A service to celebrate the life of Dorothy Rogers will be held on Thursday, December 16, 2021, at 1:00 p.m. at Cashmere United Methodist Church, 213 S. Division St., Cashmere, WA. Memorial contributions may be made to Cashmere United Methodist Church or Central Washington University.

Dorothy Claire Rogers (Nicholson) 97 of Cashmere, Washington, passed away peacefully on Thursday, December 2, 2021, at Cashmere Post Acute. She was born on March 12, 1924, to Daniel and Claire Nicholson of Peshastin, Washington. She graduated... View Obituary & Service Information

The family of Dorothy C. Rogers created this Life Tributes page to make it easy to share your memories.