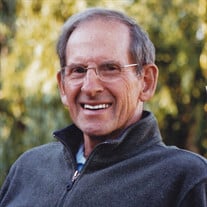 Dr. Jay D. Roeter passed away peacefully August 27, 2021, at Ella's Adult Family Home in Wenatchee, Washington at the age of 90. He was surrounded by family during in his precious last days. He will be deeply missed by his 5 children and their spouses, 11 grandchildren and 17 great grandchildren, surviving siblings and countless friends and family. Jay was preceded in death by his wife of 56 years, Joan Irene Roeter, August 19, 2013. Jay was born December 15, 1930, in Alder, Washington one of ten children. Later they moved to a small dairy farm in Rice, Washington. He graduated from Kettle Falls High School where he was active in sports including football, basketball and boxing. Jay and Joan modelled devotion to family, community and country and that remains their legacy. Jay served 4 years in the US Navy as a radarman during the Korean War. Later he married Joan and went on to Dental School at the University of Washington graduating in a record 6.5 years while they were raising 3 young sons. After graduation they moved to Wenatchee in 1960 where Dr. Roeter began his pediatric dental practice during which time they added two daughters. Jay enjoyed pediatric dentistry touching thousands of young lives up to his full retirement at age 78. He was board member of the Washington Dental Service and served on the SmileMobile Dental Van providing dental services around for low-income patients facing challenges accessing dental care. Jay was active in the local Exchange and Rotary clubs where he exhibited a sense of humor and public speaking prowess serving as 1987-1988 president of the latter. Jay thought it important to be involved supporting local and national political candidates and even served as a delegate at a regional convention. Jay and Joan were members of Holy Apostles and St Joseph 's Catholic Church where at the latter, Jay assisted in mass for many years. In 1971 Jay and Joan took their family on a yearlong European adventure where they lived in Switzerland as Jay practiced pediatric dentistry for the Swiss government. Jay coached his boys in Little League and regularly took his kids skiing at Mission Ridge singing to Neil Diamond and John Denver 8-track tapes on the way up and down the mountain. Jay loved his family and made it a point to be involved in their lives such as sponsoring not just one but two family reunion trips to Hawaii. He took his grandsons salmon fishing in Canada one of which later became an accomplished fishing guide. He loved to bird hunt and did so with his sons, grandsons and beloved Brittany, Cami. Skilled also in orthodontia, Jay, called Papa by his grandkids also did many of their braces and, unprompted, contributed to their college saving funds. Jay belonged to a poker club that met monthly for 50 years. He loved to golf and play racquetball with numerous friends. He and Joan enjoyed traveling, especially to Hawaii. Jay was an avid U of W Husky Football fan and when he wasn’t attending in person he never missed watching on TV with his longtime friend and former Husky fullback, Ed Sage. Jay is survived by son Mike (Cathy) Roeter of Bellevue, WA., son Mark (Lisa) Roeter of Brush Prairie, WA., son Steve (Sandy) Roeter of Cashmere, daughter Lisa (Ross) Hurd of Wenatchee and daughter Jennifer Roeter of Edmonds, WA.

Dr. Jay D. Roeter passed away peacefully August 27, 2021, at Ella's Adult Family Home in Wenatchee, Washington at the age of 90. He was surrounded by family during in his precious last days. He will be deeply missed by his 5 children and their... View Obituary & Service Information

The family of Dr. Jay D. Roeter created this Life Tributes page to make it easy to share your memories.