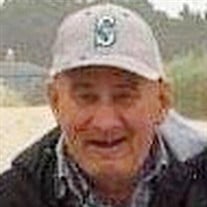 Born to Floyd and Laverne Arndt on the only day he said he could be, Valentine's Day of 1945, because he was so sweet. It wasn't the blaze of glory we thought it would take, but rather complications from what we thought would be a simple gallbladder removal surgery, that he succumbed to. He grew up with his two brothers: Bruce and Dennis, in beautiful Palisades, WA. He spent most of third grade in the hospital, where he survived polio, then graduated from Eastmont, in 1964. Duane went on to Big Bend Community College, where he learned mechanics. He was drafted into the U.S. Army and landed in Vietnam. After finding a letter he wrote to his mom, he figured himself lucky to be stationed where others were sent for R&R. This is also where he learned to play poker and when a ship takes three months to get to its destination, there's a lot of time to practice having once won a comrade's entire paycheck. After being discharged from the U.S. Army, he came back to Palisades and met a young lass, Colleen. They married July 10, 1971, and in July of 1972, they welcomed their only child, Sheena. Duane was made with iron and grit for sure. I dare say John Wayne was not as tough. Even amongst fellow farmers, I can't imagine one that worked harder. He worked for the Biram Family for over 50 years, while also tending his own field and leasing others, specializing in alfalfa. I'm told no one could match his skill driving a harrow bed or keeping one running long past its time to be abandoned. He was notorious for silly accidents, setting fires, or medical mishaps. He was able to survive an aneurysm over ten years ago, that doctors say he shouldn't have survived, fell off haystacks, flipped 4-wheelers, broken bones, second degree burns, and burned down the boss's shop. Palisades will most certainly remember him as a man to count on to get the job done, but also a wealth of gossip, whether they want to know or not, and to take it all with a grain of salt. He only hears every fifth or sixth word of a story, so he has to fill in the missing pieces. He has farmed from Linville's to Billingsley's and everywhere in between on both sides of the road. Even after moving to the big city, he still continued working the land, driving the tractor, and mending the fences, sometimes on crutches. He simply didn't know how not to farm... unless there were fish to be caught or Seahawks to watch. He finally slowed down a little over the winters and spent his off time volunteering at the Rock Island Food Bank and playing pinochle with the Spaeth brothers: Marty, Kevin, and Kirk. If he and Colleen weren't home, you could easily find them trying their darndest to hit it big at Mill Bay Casino, and actually did a couple times. He loved his grandkids: Harliegh and Dylan, but it was great-granddaughter, Lyla, that gave a special twinkle to his eye. He was a man with no enemies and knew no strangers. A man of character. Duane loved all sports, especially Gonzaga basketball, Seattle Mariners, and of course, his beloved Seahawks. It was quite possibly the heartbreaking losses all the teams had last season and the current Seahawk season, that was more than he could stand. I could go on, but I'll end with a quote from John Wayne - "Nobody should go to the movies unless they believe in heroes." I believed in mine and I got to call him dad. Duane is survived by his wife, Colleen (nee Collins); daughter, Sheena Arndt; granddaughter, Harliegh Cooper; grandson-in-law, Nate Fulkerson; great-granddaughter, Lyla Fulkerson; brother and sisters-in-law; and numerous nieces and nephews. He was preceded in death by his parents, Floyd and Laverne Arndt; brothers: Bruce and Dennis; and grandson, Dylan Cooper. Special thanks to friends: Justin Sachs, Josh Summers, the Spaeth brothers: Marty, Kevin, and Kirk, his fishing buddies, Walt Lindsey, and Dal Stevens, and everyone else that has lived in Palisades over the last 76 years. It's been a party. A Celebration of Life will be held on November 6, 2021, at 11:00 a.m., at the Palisades Grange Hall. There will be a potluck, please bring a chair.

Born to Floyd and Laverne Arndt on the only day he said he could be, Valentine's Day of 1945, because he was so sweet. It wasn't the blaze of glory we thought it would take, but rather complications from what we thought would be a simple gallbladder... View Obituary & Service Information

The family of Duane W. Arndt created this Life Tributes page to make it easy to share your memories.

Born to Floyd and Laverne Arndt on the only day he said he could...