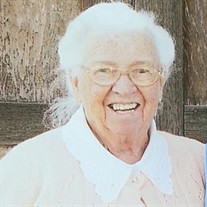 Esther “Eileen” Zones, 90, a longtime resident of Waterville, passed away April 30, 2020. She was born August 8, 1929 in Omak, WA to Preston and Dicie Pyeatt. She grew up in the Tonasket area and graduated from Tonasket High School in 1947. She attended business school in Mt. Vernon, WA. After completion, she worked at the Welfare office in Okanogan, WA and then worked for several years at Grand Coulee Dam as a secretary to the engineers. On January 30, 1954, Eileen married John Charles Zones in Okanagan, WA. Eileen and John lived 62 of their 65 married years in Waterville where they raised their three children Don, April and Marla. In March of 2016 Eileen and John moved to Bonaventure Senior Living. Both also lived at Golden Years Adult family home and after John’s passing in 2019, Eileen has lived at Blossom Creek Memory Care. Eileen was a nurse’s aide at the Douglas County Memorial Hospital in Waterville and packed apples for many years for Orondo Fruit Shippers and Auvil Fruit Company. She was a woman of many talents; she was a wonderful cook and was known for some years as “the cookie lady” because of all the delicious and beautiful cookies she baked and sold for special occasions. In her earlier years, she was active in PTA and was a volunteer who helped decorate the Waterville float for Apple Blossom and other parades. She enjoyed playing the piano, crafts, gardening, canning, word puzzles and was an authority on good restaurants and latte stands throughout the Pacific Northwest and into Canada. Eileen was part of a nondenominational worldwide fellowship of Christians. She made her choice to serve God at the age of 9 and was faithful until the end. She is survived by her children; Don, of Cashmere, WA; April (Darrel) Dusek of Libby, MT; Marla (Calvin) Nation of Marysville, WA; grandchildren Amber (Mike) Herrera, Austin (Tresha) Zones, Jonathan (fiancé Felicia Luna) Dusek, Erin (Cody) Lozier, Derrick (fiancé Priscilia Octarina) Nation, Brendan (Emily) Nation, Lacey (James) Carew, Rhonda (Verlyn) Woehl and Troy (Gloria) Dusek; great grandchildren Arianna, Kai, Mya, Jaden, Aiden, Emmit, Penelope, Asher, Quinlynn, Sofia, Kaleb, Kaitlyn (Shayne), Branden and Malachi; great-great-grandson Kasyn; her sister, Laura Sjogren of Mt. Vernon, WA and many nieces and nephews. She was preceded in death by her husband John, her parents, Preston and Dicie Pyeatt and her infant sister Emma Jean Pyeatt. The family would again like to thank Derek Whitehall, PA-C, Golden Years Family Home, Blossom Creek Memory Care and Hospice for their loving and compassionate care. A special thank you to Marilyn Sherling, Shirley Aarestad and Terry and Evelyn Gildersleeve for their continued visits and kindness to Mom. In lieu of flowers, please consider making a donation to the Waterville Ambulance Fund by calling The Waterville Clinic at 509 745-8461. There will be a private graveside service at the Waterville Cemetery.

Esther &#8220;Eileen&#8221; Zones, 90, a longtime resident of Waterville, passed away April 30, 2020. She was born August 8, 1929 in Omak, WA to Preston and Dicie Pyeatt. She grew up in the Tonasket area and graduated from Tonasket High School... View Obituary & Service Information

The family of Eileen Zones created this Life Tributes page to make it easy to share your memories.