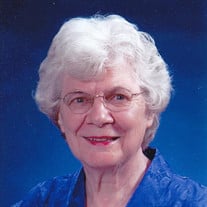 Ruth (Elaine) Cunningham March 13, 1930 – January 12, 2020 Ruth E. Cunningham was born on March 13, 1930 to Rolland W. and Ruth H. Parsons in Woodford, Wisconsin. She passed away peacefully to her heavenly home on January 12,2O2O following end stage advanced Parkinson's disease. She championed this debilitating disease for over 25 years. Elaine was born the second of three children and lived in rural Wisconsin towns. Her father was her 5th and 6th grade teacher and her high school principal. He later became her major college professor when he was asked to teach at Eastern Nazarene College (ENC) and the family moved to Quincy, Massachusetts. She attended ENC and graduated in 1952, receiving a BS in Education. While attending college, she met her husband, Cloyce C. Cunningham Jr. They were married on July 28, I95I in Quincy. They had two children, John Edwin and Ruth Marlea. She was a dedicated pastor's wife, mother, and homemaker. She served alongside her husband for over 40 years. Together they pastored and served in Nazarene churches from 'Cape Cod to the Cascades' [title of one of her books], on their ministry journey across the United States. Over the years, she used her teaching degree to educate many elementary-aged children. She earned her Master of Education from the University of St. Francis in Ft. Wayne, Indiana in 1972. From her early years on, Elaine has always loved books. As a young child, she read over 100 books by the time she was in first grade. Her love for reading led her into a passion for writing. She was a gifted and talented author, publishing 14 books, over 100 magazine articles and selections in a dozen book compilations. She never lost her love for reading. Even in her last months, you would find her reading The Wenatchee World newspaper, favorite magazines, and novels written by her favorite authors. After her husband retired in Wenatchee, Elaine continued to work as a program assistant for the CRAAA (Columbia River Area Agency on Aging) for 8 years. Due to her husband's failing health, they moved to Kansas, to live with son, John, and daughter-in-law, Sandy. After ten years and the death of her husband in June 2OO7, Elaine returned to Wenatchee to spend her final years. She had a great capacity to love and care for others as she lived out her faith, touching countless lives. She will be dearly missed by all and forever in our hearts. She is survived by her son, John Cunningham (Sandy) of Rockford Ml, and her daughter, Ruth Leslie (lan) of East Wenatchee WA; grandchildren: Sara Falk (Joshua), Jessica Craig (Matthew), Jeffrey Smith; step grandchildren: Glen Leslie (Laurie), Shauna Enos, Kara Bash (John); great grandchildren: Lincoln and Owen Falk, Kaley, Madison, Mackenzie and Katelyn Craig, Ashbourne Smith; step great grandchildren: Arielle Enos (Tyler), Jade Enos, Tristan (Natasha), Grant and Devon Leslie; step great great grandchildren Zoe Johnston, Jaxton Guiffra, Natalie Leslie; sister-in-law: Harriett Dunning; numerous nieces and nephews. She was preceded in death by an infant sister, Lois Eileen Parsons; brother, Ronald John Parsons; parents, Rolland W. and Ruth H. Parsons; husband, Cloyce C. Cunningham Jr. Services postponed until a later date to be announced. As an expression of sympathy in lieu of flowers, memorials can be given to JESUS Film Harvest Partners. Checks can be sent to: JFHP, 15055 West 116th St, Olathe KS 66062. Or online at: http://www.jfhp.org/memorialgift. The family wishes to thank the caregivers of Avalon Adult Family Home as well as CWH Hospice services for their loving support and care for Elaine during her last days.

The family of Elaine Cunningham created this Life Tributes page to make it easy to share your memories.