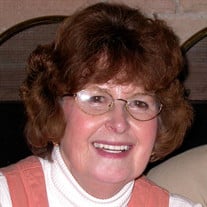 Ellen Louise Graybill, 92, passed away peacefully on December 7, 2019. Ellen was born on August 7, 1927, at the family home in Snohomish, the first child of David and Dorothy Bates. She was proud of serving as a plane spotter at age 14 during WWII. As a teenager, her family moved to Eastern Washington for a drier climate. She graduated from Cashmere High School in 1946. She worked for a time as a switchboard operator and also as a bookkeeper. While working in her mother's cafe, she met David Graybill and they married on August 15, 1954. David adopted her three children, Dave, Bette Jo and Rick. In 1966 they adopted their daughter Amy and the following year their son Lane. They celebrated their 60th anniversary in 2014, and David passed away the following year. She worked in various fruit warehouses as an apple sorter for many years and sold Avon. She dedicated her time to the Brethren Church, serving on many committees and singing in the choir. She served on the Garden Terrace Guild and delivered Meals on Wheels. The family home was the gathering place and the doors were always open to her children's friends who were treated as extended family. She was a wonderful hostess and cook, and some of the best times were spent around the table for holidays, birthdays or any occasion, and for the lunch she provided nearly every day. She enjoyed watching her kids and grandkids grow up, attending their many music and sporting events, and loved having them with her at all times. Mom and dad took their family on adventures throughout the western states and on camping trips locally. They enjoyed many cruises off both coasts of the U.S. Ellen enjoyed her final years at Colonial Vista where she loved to play games and spend time with her friends. Ellen is preceded in death by her parents; husband David; daughter Bette Jo; and siblings Robert Bates, Betty Smith, and Richard Bates. She is sorely missed by her sons Dave (Eileen), Rick and Lane; daughter Amy (Todd); grandchildren Ellie, Brent, Whitney, Rachel, Kael, Katie and Sophie; and great-grandchildren Emme, Zimora and Lennox. A memorial service will be held on January 11, 2020, at 2:00 p.m.at the Brethren Baptist Church at 535 Okanogan Street, Wenatchee. Memorial donations may be made in her name to Garden Terrace, 500 N. Emerson Ave., Wenatchee, WA 98801

Ellen Louise Graybill, 92, passed away peacefully on December 7, 2019. Ellen was born on August 7, 1927, at the family home in Snohomish, the first child of David and Dorothy Bates. She was proud of serving as a plane spotter at age 14 during... View Obituary & Service Information

The family of Ellen L. Graybill created this Life Tributes page to make it easy to share your memories.