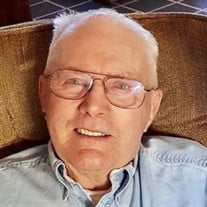 Emory C. “Tim” Webber passed away on Sept 4, 2020 after a full, long life. Tim was born Sept. 27, 1928 in Washburn, ILL to John and Ellen Andrews Webber. Emory became “Tim” after he was Tiny Tim in the annual Christmas pageant. He began his lineman career at the age of 14, when he hooked up with a power crew as a grounds-man. For over 70 year as an IBEW member, his work took him from Illinois to Florida and across the USA. He loved traveling the open road and always said Washington State is “God’s Country”. He met his first love, Joanie Jessup, when he was 16 and they were married in 1948. They raised two daughters, Cheryl Lee and Cindy Anne in Florida, where Tim built power lines from Lake Worth to Palm Beach. Joanie passed away in 1970 and Tim began a second life with Ingrid Stippa in 1971. They moved to Washington State to be near family and raise their only daughter, Joy in Cashmere. He worked for Douglas County PUD, and was always proud of his career as a lineman. Tim loved Yaksum Canyon, especially his neighbors Mike and Linda Bushy. He spent time at Pike Street Market selling apples and was very proud of his hand-built furniture and portable sawmill. He leaves us with this lineman’s proverb: “Don’t step on nothing.” He is survived by Cheryl (Jerry) Miller of La Quinta, CA, Cindy (Bill) Mello of Goldendale, WA, Joy (Greg) Margolis of Nantucket, MA and grandkids Gerry (Kari) Keating, Chad (Becky) Keating, Kelli Potter, Bonnie (Jim) Siena, Alyson (Troy Poppin) Mello, Max and Zella Margolis. He has 9 great grandchildren and 1 great-great grandchild. He is predeceased by both of his beloved wives and his grandson, Ryan Luebber.

The family of Emory "Tim" Webber created this Life Tributes page to make it easy to share your memories.