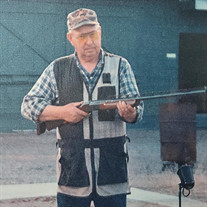 Ernie Garrett, age 86, passed away at Fieldstone Memory Care on May 18, 2022, surrounded by family. For the last eight months, he had suffered several health issues and finally succumbed to a major stroke. Ernie was born in Wenatchee, WA, to Orvle Fulton Garrett and Violet True (Haggard) Garrett. His parents traveled from location to location packing fruit, so Ernie spent his first 11 years primarily with his grandmother, Cora, in San Bernardino, CA. He loved his grandmother dearly and had very fond memories of his time with her. When he was 11, he was blessed with a baby sister, Leah Lorraine. His mother didn't wish to travel as much with two children, so they bought a small orchard in Monitor, WA, and moved there. They also worked at Blue Star Growers in Cashmere, WA. After the family moved, Ernie attended Monitor Grade School, and graduated from the eighth grade. There, he met Jerry Kenoyer, and they became close pals and lifelong friends. In his senior year, he began dating Loretta Farmer, of Cashmere. They were in the same graduating class of 1953, and were married in November of the same year. After five years of marriage, Ernie was drafted into the Army. Loretta got to travel with him when he spent a one year tour of duty in Germany. Following his honorable discharge, he began a career as a farm equipment salesman for Valley Tractor in Wenatchee. He loved being a salesman. Ernie, Loretta, and his parents, purchased an orchard together. In 1975, when Orvle passed away, Ernie changed his career to become a fulltime orchardist. Eventually, Ernie purchased several orchards in Cashmere and Monitor and was very successful. After nine years of yearning, Ernie and Loretta were blessed beyond measure with an adorable baby boy, Patrick Eugene, and four years later, a beautiful baby girl, Suzanne Jean. Patrick was the first grandchild on either side of the family, and both children were totally loved. Ernie was an avid hunter when he was young. Later, he preferred trap shooting and was active in the Cashmere Gun Club. He was an impressive steelhead fisherman and loved fishing the Icicle and Wenatchee Rivers. He also liked to play cards and shoot pool. Ernie was very competitive, regardless of which sport he participated in. Ernie was a board member for the Wenatchee Reclamation District and served as President from 1987 to 1999, which he enjoyed. During that time, a new headquarters building was built in Sunnyslope, WA, new trucks were provided for the employees, wages were brought up to date, and numerous improvements were accomplished. Ernie was a terrible tease, but he didn't tease you if he didn't care about you. He was a generous man and was apt to loan a tractor, trailer, or boat, haul your car with his trailer, change your tire, provide you with a house, give you a loan, or help you in any way he could. In 2005, Ernie and Loretta sold their house and leased the orchards to his nephew, Paul Strutzel, so they could move to Camano Island, WA, and be closer to their daughter, Suzanne, and their grandchildren. While there, Ernie began to have some memory loss and was diagnosed with Alzheimer's. To be closer to familiar territory, they moved back to the Wenatchee Valley. Although Alzheimer's can cause people to have all sorts of different personality issues, Ernie was blessed to have a positive change and told most of his family, friends, and employees how much he loved them. In fact, he couldn't keep from talking about it, and told them over and over how much he loved them. His grandson, Shawn Cox, is now leasing the orchards and took on a lot of responsibilities that Ernie couldn't keep up with. Shawn also stepped up to help in the last months with health care. Ernie and Loretta were very appreciative. Ernie is survived by his wife, Loretta, of 68 years; daughter, Suzanne (Jon) Stephenson; grandson, Shawn (Nicole) Cox; granddaughter, Alyssa (Michael) Jenkins; granddaughter, Christina (Timothy) Hall; great-grandchildren: KaeLee, Hannah, and Alexis Cox; and Elijah, Jedha, and Peter Hall; his sister, Leah Davies, and her children: Angela Evans, Paul (Beverly) Strutzel, Beau (Kara) Strutzel, Adam Strutzel; his sisters and brothers-in-law: Janet (Robert) Tritle, Gary (Carol) Farmer, Dan (Carolyn) Farmer, Linda Fleming, Sherrie (Harold) Rash; and many nieces, and nephews. He was preceded in death by his father, Orvle, and mother, Violet; his son, Patrick; and his great-granddaughter, Arya Hall. Loretta would like to thank their family and friends who have been tremendous help: Monica and Paola from M&P Healthcare, Hospice, who were able to make his last days comfortable, and all the nurses and caregivers at Fieldstone Memory Care, who were helpful and compassionate. Ernie's family thanks all of you. A Visitation will be held at Jones & Jones - Betts Funeral Home, 302 9th St., Wenatchee, WA, on Thursday, June 2, 2022, from 4:00 to 6:00 p.m. Funeral Services will be held at Columbia Grove Covenant Church, 19 McElmurry Ln., East Wenatchee, WA, on Friday, June 3, 2022, at 10:30 a.m. A luncheon will be served at Columbia Grove Covenant Church after the Funeral Service, and a Graveside Service will follow at Cashmere Cemetery at 2:00 p.m. Memorials may be given to: Columbia Grove Covenant Church, 19 McElmurry Ln., East Wenatchee, WA, 98802, and Hospice Wenatchee, 731 N. Chelan Ave., Wenatchee, WA, 98801.

Ernie Garrett, age 86, passed away at Fieldstone Memory Care on May 18, 2022, surrounded by family. For the last eight months, he had suffered several health issues and finally succumbed to a major stroke. Ernie was born in Wenatchee, WA, to... View Obituary & Service Information

The family of Ernest "Ernie" Garrett created this Life Tributes page to make it easy to share your memories.