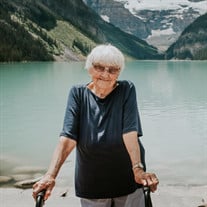 FRANCES M. "FRANKIE" KELLEY PULSE BRENDER, a well-known resident of Leavenworth, passed away on Friday, November 1, 2019. She was born on July 10, 1920 at Wenatchee, Washington to Ollie and Mable (LaBarr) Kelley. She was raised and received her early education in Peshastin, where her father had an orchard. On November 15, 1938 she married William E. Pulse at Reno, Nevada. They made their home in Lodi, California for two years and in 1940 they moved to the Leavenworth area, where they owned and operated the Fisherman's Wharf on Lake Wenatchee from 1958 to 1963. She then owned and operated the Leavenworth Florist's from 1964 to 1971. On November 7, 1969 she married Jack P. Brender at Leavenworth, where they owned and operated an orchard until his death in 1986. Frankie was a member of the Washington State Autumn Leaf Festival and was honored to have represented the Bavarian Village as Royal Lady in 1972. Together with Othello Coffin, they started the Autumn Leaf Festival Parade and she served as parade chairperson for several years. She was a past member of the Leavenworth Chamber of Commerce and had worked on many committees within various service clubs in town during the transformation of Leavenworth into the Bavarian Village. She always supported any of the school activities her children, grandchildren or great grandchildren were a part of. She will be remembered for her willingness to give of herself and her love for her family. She was always "on the ready" to help wherever she could, whether it was to make cookies for the kids at the ski hill or to support any activities the kids might be involved in. Survivors include her sons, William E. Pulse of Bellingham, WA and Kenneth “Kenny” L. Pulse and wife, Gracie of Leavenworth; daughter-in-law, Gail Pulse of Leavenworth; step-son Jory Brender and wife, Jodi of Snohomish; step-daughter-in-law, Christine Cram of Modesto, CA; step-daughters, Jacque Peterson and husband, Scott of Bellingham, and Paula Odell and husband, Brian of Wenatchee; sister, Betty West; brother-in-law, Chuck Wilsey of Wenatchee; eighteen grandchildren; many great-grandchildren; and many nieces and nephews. Frankie was preceded in death by her parents; her husbands, William E. Pulse in 1965 and Jack P. Brender in 1986; brother, Gerald “Jerry” H. Pulse; sister-in-law, Sharon Pulse; step-son, Jeff Cram; brother, Bud Kelley; sisters, Nita West and Peggy Wilsey; and her very special friend, Geri Davy. A graveside service will be held on Saturday, November 23 at 11:00 at Mountain View Cemetery in Leavenworth. Frankie’s life will be celebrated on Saturday, November 23 at 1:00 pm at the Leavenworth Festhalle., 1001 Front Street. In lieu of flowers, donations may be made to Cascade Ambulance, 817 Commercial Street, Leavenworth, WA 98826. Please be sure to specify AMBULANCE with your donation.

FRANCES M. "FRANKIE" KELLEY PULSE BRENDER, a well-known resident of Leavenworth, passed away on Friday, November 1, 2019. She was born on July 10, 1920 at Wenatchee, Washington to Ollie and Mable (LaBarr) Kelley. She was raised and received... View Obituary & Service Information

The family of Frances M. Brender created this Life Tributes page to make it easy to share your memories.