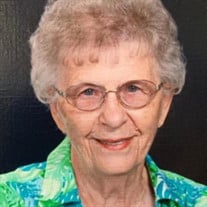 It is with great sorrow and a heavy heart we share the news of the passing of our mother, Frances Ann Hardgrove (Menzia) at her home surrounded by family and loved ones. She was welcomed into the Lord's Grace on May 2, 2022. Fran was born on February 9, 1934, in Prosser, WA, to parents: Conrad and Frances Menzia (Zent). She grew up in Prosser with 17 siblings, and she graduated from Prosser High School. She met her husband of 51 years , Tom, by chance, when he walked by her home, after he came back from the Korean War. They married in 1955, and made a life in Torrance, CA, moved back to Prosser, WA, but then finally settling in Cashmere, WA, where they raised five children. Fran was a devout Catholic that rarely missed Sunday Mass. She adored spending time with family and friends, often telling stories of her childhood. She enjoyed to travel, which she did with her husband, Tom, having been across the U.S. and parts of Europe after his passing. She loved to read and watch Sports including her favorite team, Gonzaga, and was a prolific seamstress sewing wedding dresses for her daughters, and outfits for all her children, grandchildren and great-grandchildren. She had constructed so many quilts over the years, even she couldn't recall an accurate number. In fact, she was helping others construct them all the way up to the month of her passing. Fran is survived by her brothers: Jack and Joe Menzia; children: Lisa Crosslin of Wenatchee, WA, Gayle White of East Wenatchee, WA, Pamela Hardgrove of Snohomish, WA, Robert Hardgrove of Cashmere, WA, and Joy Ingraham of Peshastin, WA; ten grandchildren; and 16 great-grandchildren; including one on the way. She also has many wonderful nieces, nephews and close friends that she cherished. Fran joins her loving husband, Tom Hardgrove; grandson, Brian Ferguson; her parents: Conrad and Frances Menzia; and 15 brothers and sisters in Heaven. We want to thank Hospice for their love and support these past five months, they are Angels. There will be a Mass on Friday, June 10, 2022, at 10:30 a.m., at the Cashmere Catholic Church, 300 S. Division St., Cashmere, WA, 98815; with a gathering after the Service at the Legion Hall, 401 Sunset Hwy, Cashmere, WA. Fran would love to have donations sent to Saint Jude, 425 Pontius Ave. N., Suite 410, Seattle, WA 98109, which she had supported throughout the years.

It is with great sorrow and a heavy heart we share the news of the passing of our mother, Frances Ann Hardgrove (Menzia) at her home surrounded by family and loved ones. She was welcomed into the Lord's Grace on May 2, 2022. Fran was born on... View Obituary & Service Information

The family of Frances A. Hardgrove created this Life Tributes page to make it easy to share your memories.

It is with great sorrow and a heavy heart we share the news of...