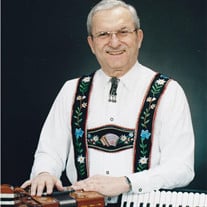 Francis (Frank) Thomas Calapristi, was born into Heaven on Sunday, August 1, 2021, in the presence of his family and loved ones. He was born in Philadelphia on December 5th,1932 to Francesco and Nicolina (Degregorio) Calapristi and was the youngest child of their large first-generation Italian family. Frank played music ever since his feet dangled from the bench of the family’s piano. In high school, he won regional awards in the Northeastern US as a gifted pianist. His father introduced him to the accordion and Frank advanced to become the consummate accordion player. Frank attended Upper Darby High School where he met the love of his life Loretta Callegari whom he married in 1954. After graduating from Pennsylvania Military College in 1955, his Army officer commission brought Frank and Loretta to Fort Benning, GA. Following his Army service, Frank and Loretta returned to Philadelphia, where he began his career in the Aerospace industry. At General Electric, Frank worked on the Mercury, Gemini, and Apollo space missions, in addition to numerous satellite programs. While in Philadelphia Frank joined the Durning String Band Mummers organization and participated in multiple New Year's Day parades. His career provided the entire family memorable experiences in places as varied as Picayune, MS, Valley Forge, PA, Seminole, FL, and the Pacific Northwest. Frank and Loretta shared their love of travel with their children and took family summer vacations that covered most of the United States. In their later years Frank and Loretta enjoyed international travel to Mexico, Germany, Austria, Switzerland, Tunisia, Denmark, Spain, and France. Frank was blessed with love twice in his life. After Loretta’s passing in 2014, he met Nancy Cottle. They enjoyed a thriving social life that included Saturday night dances, thrift shopping and many other adventures. These included trips to Alaska, Greece, and Italy (where he once even entertained Romans with his piano playing at a local restaurant). Frank started visiting Leavenworth in the 1980’s to attend art workshops and paint the beautiful landscapes and natural subjects in the region. Upon retirement from the Hanford site after 20 years in 1996, he began his second act as a professional musician for another 25 years. He was passionate about promoting Leavenworth and its Bavarian image. He chaired the Leavenworth Accordion Festival and Autumn Fest and loved being an active board member in Project Bayern. He was known to many as the strolling accordion player on Front Street and provided entertainment at local restaurants. Frank most recently entertained guests at the Enzian Hotel and appeared in countless private and public events throughout the region. He will be dearly missed. Frank was a dedicated member of the Our Lady of Snows Catholic Church, where he served as a fourth-degree knight with the Knights of Columbus. He is survived by sons, Frank (Becky) Calapristi, Gus (Vicki) Calapristi; daughters, Colette (Jeff) Casey, Barbara Calapristi (Ted) Jordan. Grandchildren include Jenny Calapristi, Tony (Breanna) Calapristi, Beth (John) Stevenson, Jackie Calapristi, Et Aliae (Chauncie Casey), Katherine Casey (Brandon Seekell), Olivia Casey, Wyatt Jordan, Sophia Jordan, and great grandchild Harrison Calapristi. Frank is also survived by his loving companion Nancy Cottle. Words cannot express how much all of us will miss him, but we know he is rejoicing in a heavenly reunion with Loretta, his parents and brothers, sister, and friends. We know he is happy and at peace. We Love You! Visitation will be held at Jones & Jones-Betts in Wenatchee on Thursday, August 19 at 4:00 pm with recitation of the Holy Rosary. A Mass of Christian Burial will be held on Friday, August 20 at 1:00 p.m. at St. Joseph’s Catholic Parish in Wenatchee (Reception to follow). Concluding Service and Interment will be held Saturday, August 21, 2021, 1:00 pm at Sunset Gardens Cemetery in Richland WA. (Reception to follow).

Francis (Frank) Thomas Calapristi, was born into Heaven on Sunday, August 1, 2021, in the presence of his family and loved ones. He was born in Philadelphia on December 5th,1932 to Francesco and Nicolina (Degregorio) Calapristi and was the... View Obituary & Service Information

The family of Francis "Frank" Calapristi created this Life Tributes page to make it easy to share your memories.

Francis (Frank) Thomas Calapristi, was born into Heaven on Sunday,...