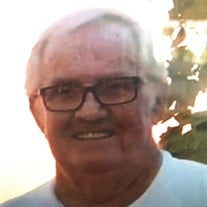 Frank A. Ayling passed away peacefully on November 17th. He was 78 years old. Frank was born on Christmas Day in 1941 to James and Alma Ayling. He grew up, the 7th of 10 children, in Grand Coulee and then Tonasket. It was in Tonasket that he met the great love of his life, Dorothy Seals. They were married on a lucky rainy Saturday, the 17th of June, in 1961. Before leaving for their honeymoon, they stopped for burgers, fries and chocolate shakes, a tradition they continued for each of their 59 anniversaries. Together, Frank and Dorothy built a life and a family. They began in Burbank, California. Frank worked at the Flying A Gas Station, and Dorothy loved to walk over and visit him with their new daughter, Terri, strapped into her stroller. They briefly returned to Tonasket, where their second daughter, Tammy was born. From there, they settled in Wenatchee. After studying at Wenatchee Valley College, Frank began his career with The Great Northern Railroad. He worked at BNSF Railroad for 38 years and retired, as a Yardmaster, in 2002. In 1967, Frank discovered his second great love: racing. Inspired by his brother, Walt, Frank bought and built his own race car, a yellow Chevrolet Monte Carlo. He drove that car, number 46, with the help of his pit crew, to two championships in the Nascar Northwest Series, Late Model Sportsman Class. Together, he and Walt were the first inductees into the Wenatchee Valley Super Oval Hall of Fame. Frank was never one to sit idly. After retiring from racing, Frank began farming. He took pride in his cherry orchard and shared that with his family. He taught his daughters and then, later, his son-in-law and granddaughter, how to properly pick Rainiers, how to identify each variety just by the bark of the tree, and how to prune in the winter. Much to her delight, he even taught his granddaughter, Rebecca, to drive his big orange tractor. Frank loved a good Western movie, playing (and winning) multiple hands of Pinochle, and anything salty, but more than anything else, Frank loved his family. He loved taking Dorothy on many road trips. He turned their house into Dorothy’s dream home, complete with a diner in the garage and a shed for her Christmas decorations. He loved taking his daughters to drill team camps, and, later, attended every event his grandchildren participated in, from basketball games to musicals to hunting trips. On multiple occasions, he even played Santa for classroom Christmas parties. Frank loved his sons-in-law, too. He welcomed them into his family just as he had been embraced by his own father-in-law, Ivan. We will miss Frank’s booming voice, his racing stories, and his advice, but more than anything, we will miss his love. Frank is survived by his wife, Dorothy Ayling, their daughters, Terri Thomsen and Tammy Lane, sons-in-law Steve Thomsen and Eric Lane, grandchildren Rebecca Lane, Julia Day, Jessica Day- Fernandez, and Lakin Thomsen, grandsons-in-law Christian De Sousa and Elijah Fernandez, and great grandchildren, Domingo Fernandez, Mateo De Sousa Lane, and another due in March, Adrian Allen Fernandez, his brother Deets Ayling, and sisters Moya Barton, Derinda Foster, and Ket Ayling. Frank was preceded in death by his parents, his brothers, Mike and Walt, and three sisters, Alma, Eloise, and Mary. A celebration of Frank’s life is tentatively planned for Saturday, June 19, 2021 at Frank & Dorothy’s home in Wenatchee.

Frank A. Ayling passed away peacefully on November 17th. He was 78 years old. Frank was born on Christmas Day in 1941 to James and Alma Ayling. He grew up, the 7th of 10 children, in Grand Coulee and then Tonasket. It was in Tonasket that he... View Obituary & Service Information

The family of Frank A. Ayling created this Life Tributes page to make it easy to share your memories.

Frank A. Ayling passed away peacefully on November 17th. He was...