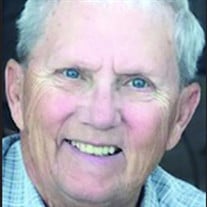 Gary Earl Mertes East Wenatchee, WA Gary Mertes of East Wenatchee, WA, was born to Harry and Etta Mertes on July 16, 1940 in Wenatchee's old Deaconess Hospital. With family members visiting throughout the day, Gary passed away on September 19, 2019, at Fieldstone Memory Care. He was the oldest of three brothers, after Bruce and Jeff were born three and eight-and-a-half years later. Gary graduated from Wenatchee High School in 1958, where he competed for the ski team. In addition to being a superb alpine skier, he was also an excellent water skier. His friends called him Biff, a nickname earned because of his aggressive style on both snow and water that would sometimes result in spectacular wipeouts known as "biffs". Other than math classes in which he excelled, Gary was an indifferent student in high school with a grade point average that reflected a propensity to skip school with some regularity. Perhaps one of the best things to happen to him was sustaining a broken leg on the ski slopes during his senior year. Back in those days, a broken leg required a lengthy hospital stay with the leg immobilized in traction, accompanied by a massive plaster cast followed by several months on crutches. Enrolled as a freshman at Wenatchee Valley College, Gary had little else to do but attend classes and study, which, to the amazement of his parents, resulted in a 4.0 gpa for the entire first year of college. The University of Washington was impressed as well, and admitted him as a straight A student for his sophomore year. At the UW, Gary affiliated with Alpha Tau Omega fraternity. Later in the school year, he and Louise Kuntz, who had become boyfriend and girlfriend in Wenatchee while in high school, were married at St. Joseph's Catholic Church on February 18, 1961. They had two daughters, Tracy and Terl, while living in Seattle. Gary decided to follow in his father's footsteps and majored in business/accounting. He was an accomplished student and went to work part-time for the accounting firm of Touche Ross (now Deloitte Touche) during his junior year. He worked as an auditor for the Seattle World's Fair as a part of his duties in 1962. Gary impressed management at the firm, advising him not to take any more accounting classes, but instead, to broaden his education so he could better communicate with clients. He was offered a full-time position, and shortly after graduation, took the CPA exam. In those days, it was extremely rare to pass all five sections of the difficult exam on the first try, but Gary proved to be the exception and became a Certified Public Accountant right out of the chute, earning a nice bonus for his accomplishment from the firm. In 1969, Gary relocated the family to Wenatchee to take over his father's accounting business and renamed it Gary E. Mertes, CPA. Eventually, he merged with Morris Lee and became a vice president of the Spokane firm. After selling his stake in Morris Lee, Gary was a financial advisor for Bud Truswell and partnered with him in several business ventures including apartment houses and assorted real estate in the Wenatchee area, as well as a business park in Kelowna, BC. He was also chief financial officer for McDougall & Sons for ten years. Gary was involved with many organizations including as a 30- year member and treasurer of Wenatchee Rotary and served on the United Way board of directors, among others. Gary was a board member of Wenatchee Mountain - Mission Ridge, a ski instructor, and director of the Buddy Werner junior ski racing program. He skied most of his life, especially enjoying being on the slopes with Louise and daughters, as well as with his extended family. Gary was a member of Wenatchee Golf & Country Club for over 40 years. Despite knocking in three holesin- one, including the first ever on the difficult #14 after it was redesigned, he was perpetually threatening to give up the game, but never did until he physically wasn't able to play anymore. He especially enjoyed time at the family vacation house on the north shore of Lake Chelan. Gary and Louise travelled extensively in Germany, cruised the Caribbean, and spent a month of several Februarys in Kona, HI. He was known to play a mean hand of poker, gin rummy, bridge, and cribbage - you name the game, he was liable to win it. He was also an avid reader. Survivors include Louise, his wife of nearly 59 years; brothers: Bruce and Jeff (Kathy), both of Wenatchee; daughters: Tracy Durtschi of Bend, OR, and Teri Jackson of Chelan, WA; grandchildren: Tim Durtschi of Jackson, WY, Erica Durtschi and Travis (Abby) Durtschi, both of Bend, Casey Jackson of UWSeattle/ Chelan, and Kyle Jackson of Chelan; and greatgranddaughter, Isla Durtschi. He was also close to extended family members including in-laws: Norm (Linda) Kuntz, John (Sherry) Kuntz, Anita (Kuntz) and Gary McDonald, as well as nephews and nieces. Gary was preceded In death by his father and mother, A special accomplishment was achieved by grandson, Kyle, who played in the Cheları High School football game the next night, as he knew Gary would have wanted, and scored three touchdowns among receptions for 161 yards and returned an interception for a fourth in his grandpa's honor. A Celebration of his Life will be held at the Wenatchee Golf & Country Club, 1600 Country Club Dr., East Wenatchee, on Saturday, October 5, 2019, from 2:00-4:00 p.m. Donations can be made to the Wenatchee Rotary Foundation. Arrangements are by Jones & Jones-Betts Funeral Home, Wenatchee, WA.

The family of Gary E. Mertes created this Life Tributes page to make it easy to share your memories.