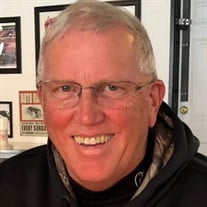 Gary Alan Riesen passed away on Friday, September 3, 2021, at the age of 70. Gary was born in Seattle, WA, on March 11, 1951, and was the only child of Walter and Eleanor Riesen. The family moved to Wenatchee, WA, in 1953, when Walt took a position with Wenatchee Federal Savings & Loan. The bank was later renamed Columbia Federal Savings & Loan, where Walt was president for many years. Gary attended Columbia Elementary, Pioneer Middle School, and Wenatchee High School. During high school, he played the trumpet in marching band and intramural tennis. He graduated high school in 1969, and went on to attend Washington State University, where he was a member of the Alpha Kappa Fraternity. Gary received his undergraduate degree in Economics from Washington State University, in 1973. He then pursued a degree in law, graduating from Gonzaga University Law School and joining the Washington State Bar Association, in 1976. After law school, he returned to Wenatchee and joined attorney Earl Foster in his law practice. He later, went into practice with John Bridges and they were law partners for several years. In 1985, Gary was elected Chelan County Prosecuting Attorney and held the position for 27 years, until his retirement in 2012. Throughout his distinguished legal career, Gary was a consummate professional, known to be respectful, diplomatic, and fair. He was highly regarded by his peers for his intelligence, integrity, legal acumen, and authenticity. During his tenure as prosecuting attorney, he tried many high-profile cases, garnering local and national attention. Gary had a reputation for remaining calm in the courtroom and exuding grace under pressure. As a public official, Gary continually strived to do what was ethical and to uphold the law to the best of his ability. In addition, Gary had a great sense of humor, was loyal, generous, and trustworthy. These admirable traits allowed him to be a trusted council, mentor, and friend to many. Gary was an avid sportsman; you could often find him hunting or fishing throughout Eastern Washington. He took many hunting and fishing trips with friends to Alaska, Montana, Canada, and Wyoming. He earnestly enjoyed taking others fishing and consistently solicited fishing reports from friends for fishing hot spots and tips on bait. Gary was an active member of the Wenatchee Sportsmen’s Association and Ducks Unlimited. He was a faithful Cougar fan, despite frequent ribbing from local Huskies. Gary was also a member of the Wenatchee Golf and Country Club, regularly playing golf with friends and family. In addition, he was a talented musician, playing various musical roles in local theatre productions and church programs. He followed the Christian faith and worshipped at several local churches, most recently at Columbia Grove. He was humble, unpretentious, and epitomized the true values of accepting and caring for others. He was always willing to lend a hand and frequently volunteered throughout the local community. Gary loved to travel and was able to take numerous trips both domestic and abroad, most with his favorite companion, Joyce. He deeply loved his family and enjoyed spending time with his grandchildren and great-grandchildren. He is survived by his loving family: wife, Joyce Riesen; daughters: Heather Riesen Douangpanya and Heidi Sprugasci, and their extended families. He was an amazing husband, father, grandfather, and friend. A Celebration of Life will be held outdoors on Saturday, September 25, 2021, at 2:00 p.m., at the Kings Church of Christ, 1610 Orchard St., Wenatchee, WA. Out of respect for the family and to help keep our community safe, masks will be required. We ask that you kindly comply and practice social distancing at the event.

Gary Alan Riesen passed away on Friday, September 3, 2021, at the age of 70. Gary was born in Seattle, WA, on March 11, 1951, and was the only child of Walter and Eleanor Riesen. The family moved to Wenatchee, WA, in 1953, when Walt took a position... View Obituary & Service Information

The family of Gary Alan Riesen created this Life Tributes page to make it easy to share your memories.