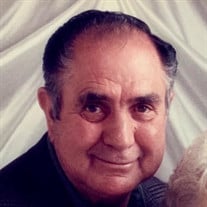 George Owen Harmon Wenatchee, WA George Owen Harmon passed peacefully at Highgate Senior Living in Wenatchee, WA on Friday, March 6, 2020 with family at his side. He was 90 years old. The fourth of nine children, George was born January 23, 1930 in Melbourne, Arkansas to William and Audrey Harmon, and resided in the Wenatchee area for over 75 years. He married the love of his life, Ella Harmon, on August 14, 1952 and spent 63 years by her side, until her passing in 2015. George was drafted into the army shortly after they were married and served 16 months in the Korean War. During that time, Ella had their first son, David. They went on to have a daughter, Peggy, and two other sons, Danny and Donny. After the war, George started working for Columbia Concrete, where he worked for 35 years before retiring early in 1987, at the age of 57. Following his retirement, he had hopes to "sleep in and golf every day.” George found that sleeping in was not something he could do, and golfing every day was difficult with all of his buddies still working. To keep busy during those first early retirement days, he started volunteering with Meals-on-Wheels, delivering meals and visiting with clients, which he enjoyed. A few years later, he and Ella decided to travel, and they enjoyed many adventurous trips together. As an avid golfer and a member of Three Lakes Golf Club for nearly 40 years, George and Ella enjoyed golfing together in couples' tournaments, making many life-long friends. Golfing was something George found very difficult to give up, and would often still make a few trips up there to “putt around,” even when it was difficult for him to get around following a stroke. He was very social and enjoyed meeting with the boys' ' for a round of golf, or even just for a cup of coffee. George is survived by his children, Peggy (Rich) Rollins of Wenatchee and Dan (Kathy) Harmon of Oregon; Grandchildren, Rey (Marcie) Harmon, Allen (Deanna) Harmon, and David (Maritza) Harmon Jr, Rick (Deb) Rollins, Cathy (Brian) Craig, Mike (Emily) Rollins, Whitney (Brian) Klos, and Tyler Harmon; his daughter-in-law, Sol Weaver, and eleven great-grandchildren, and many more friends and family. George is preceded in death by his wife, Ella; his sons, David and Donny; his parents, and brothers and sisters. All of whom he missed dearly. Special thanks to the kind and caring staff at Highgate Senior Living, whom helped care for George these past couple of years. A graveside service will be held at on Friday, March 13, 2020 at 1:00 P.M. at Wenatchee Cemetery. In lieu of flowers, the family suggests sending memorial contributions to the Wenatchee Valley Veterans of Foreign Wars (VFW).

The family of George O. Harmon created this Life Tributes page to make it easy to share your memories.