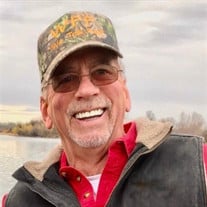 Gregory James Lyons passed away unexpectedly and much too soon on Monday, January 6, 2020. He is grieved by his wife, Rebecca Lyons and four children Katie Nelson (Max) of Atlanta GA, Kellie Cornish (Adam) of Highland, CA, Jason Lyons (Salinas, CA) and Marisol Lyons (Wenatchee) and five grandchildren, as well as his brothers Jim Lyons (Nancy), Matt Lyons (Pat) and sisters Linda Strobek, Cynthia Kraut (Jonathan) and Jeriann Miranda (Dan). Greg was welcomed into this world on July 15, 1952 by Jim and Jane Lyons and his two older sisters. Greg was thrilled to be the older brother when his three younger siblings joined the family. He grew up playing football, exploring nature, testing the limits of his parent's patience, and perfecting the art of a well-executed prank on his siblings. To his brothers and sisters, Greg was a source of balance to their tribe; he was the comedian, the storyteller, the host. An absolute shark at the poker table, Greg only ever bet imaginary things when he played with family (his sister once lost seven million dollars and her private jet in a single evening). His children attribute their own successes to Greg as he instilled in them an unwavering work ethic. Greg himself worked hard and strove to be the best. His career was marked by long stretches of sustained effort and dedication towards ambitious goals, which he met time and time again. He led improvements and expansions for his employers in the agricultural industry and excelled at building and leading high-volume, high-profit product teams through innovative product development and a personal sense of duty to each internal and external customer he served. Greg had a great big voice, but he appreciated silence. Spending time on his balcony with his wife and a glass of wine was his perfect end to a long day. He enjoyed nature and abandoning every comfort of modern life to see what the land could offer him. He loved a good hunt, both in business and in sport. He delighted in solving problems, but he believed firmly in teaching others how to solve problems for themselves. Greg stopped at yard sales and lemonade stands and he was the fellow traveler you hoped would be nearby when you had car trouble or were lost in a foreign city. Greg carried a mechanical pencil everywhere and took notes during conversations, careful to understand what mattered most to the person he was talking with. His firm handshake was as good as an executed contract. Greg evaluated the weather patterns for their effect on crops and global food sources, and processed ideas out loud for correcting an early frost or an overly harsh winter on the cherries or the orange groves. He always worried about and had a deep respect for farmers. Greg believed that a bad day could be turned around by rocky road ice cream. The punch line of many of his jokes and the ending of many of his stories remain a mystery because he'd laugh so hard telling them that he couldn't finish. Greg's absence will be felt whenever there's a funny story that isn't told, a bottle of wine that isn't shared, a golf game that isn't played, a hunting trip that isn't taken, a bet on a Seahawks game that isn't made, a salmon that isn't caught, or a deck of cards that isn’t dealt. It will be felt whenever his wonderful, contagious laugh isn't there to be heard. He was known to joke that when he died, he wanted to come back as one of his daughter’s dogs. It is the hope and belief of many who loved him that today, he is carefree, full of joy, and being held close in loving arms. Greg was preceded in death by his mother, Jane Lyons-Macy, and father, Jim Lyons. A celebration of Greg's life is planned for Saturday, March 7 at 2:00 pm at First United Methodist Church in Wenatchee. In lieu of flowers, donations may be made in Greg's memory to the Washington Apple Education Foundation (2900 Euclid Avenue, Wenatchee WA).

The family of Greg J. Lyons created this Life Tributes page to make it easy to share your memories.

Gregory James Lyons passed away unexpectedly and much too soon...