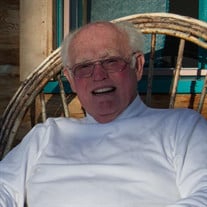 On Wednesday October 9th, 2019, Hal Lyons, age 89, died in Wenatchee, where he was born and spent most of his life. His family will miss this courageous and adventurous man, his storytelling and infectious laugh. Harold Curtis Lyons Jr. (Hal) was born on February 6th, 1930, at St. Anthony’s Hospital in Wenatchee. He attended school in Wenatchee, graduating with the WHS class of 1948. In school, he enjoyed football and downhill skiing, possibly even more than his schoolwork. Hal had an active social life as a young man, and on many occasions reminisced about running around in his first car, a 1931 Model A Roadster convertible. Hal attended Wenatchee Junior College from 1949-1951. He considered his ski racing days to be the highlight of his time there. He was a member of the ski team each year of his attendance and fondly remembered that time. This passion also led him to train for and become a member of the Stevens Pass Ski Patrol some years later. In the early sixties, he was also a member of the “Alpine Roamers” club, a local NCW mountaineering group. It was this experience and club association that, in 1969, led him to be part of an extensive search and rescue effort to recover the remains of five men who had died in a plane crash, two of whom he knew through the fruit industry. In 1952, Hal enrolled in the U.S. Coastguard to take advantage of the GI Bill. He was stationed on buoy tenders in the Straits of Juan de Fuca, off the Washington coast. He always said how much this time shaped his life and never regretted this time in the military. He received a National Defense Service Medal during his two years in service. In 1955, Hal enrolled at the University of Washington. While he liked to say he was never a very good student, making it through by the “skin of his teeth,” he graduated in 1957 with a degree in business administration from his pride and joy, the U of W. He remained loyal to the Huskies the rest of his days. Hal enjoyed working as a field representative and salesman for the Washington Apple Commission from the late 50’s into the early 60’s. His areas included the south, southeast and the midwest of the US. He enjoyed the chance to travel and learn about the industry. He also managed to ski every chance he got. Hal moved back to Wenatchee in the early sixties to continue the fruit farming tradition of his family. As early as 1918 Hal’s grandfather, Wilbur Lyons, had an apple orchard on Cherry St in Wenatchee. The Wood family — his mother’s side — were also pioneers in the orchard business. While he worked as a fieldman for Welch Fruit, he also began working with his parents, who bought their first 30 acres on Stemilt Hill in 1953. This was the beginning of Hal’s career as an orchardist. He received multiple awards over the years for his pears and cherries. Hal met the love of his life, Sylvia Sorbo, a school teacher from Minnesota, while water skiing on Lake Washington. They married in 1965 and soon began to build their dream log cabin on Stemilt Hill. In the early 1970’s, they had their two children, Kirk and then Kari. Together, they built a comfortable life and successful businesses as orchardists and apartment owners. In his retirement years, Hal fell in love with fly fishing and traveled to central British Columbia, Alaska and many other places to pursue wild rainbow trout: his favorite. The fishing trips soon turned into the family’s favorite time together. Hal was survived by his wife, Sylvia Lyons, his son Kirk Lyons, daughter Kari Lyons-Price, his daughter-in-law, Tish Gasparich, and his son-in-law, Mark Price. He is also survived by his two grandchildren, KJ & Katelynn. He life will be celebrated at a small graveside service on Friday, October 25th at the Wenatchee City Cemetery at 11 a.m. A reception will follow at the Lyons family home. In lieu of flowers, the family requests friends donate to The Children’s Home Society, 1014 Walla Walla Ave, Wenatchee, WA 98801. Donations can be made by check or online at www.childrenshomesociety.org/donate.

On Wednesday October 9th, 2019, Hal Lyons, age 89, died in Wenatchee, where he was born and spent most of his life. His family will miss this courageous and adventurous man, his storytelling and infectious laugh. Harold Curtis Lyons Jr. (Hal)... View Obituary & Service Information

The family of Hal Lyons created this Life Tributes page to make it easy to share your memories.