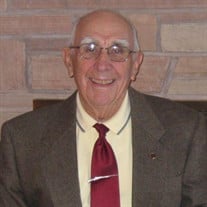 Harold Clay Beard, 101, of Mansfield, WA, passed away peacefully on July 20, 2021 at the Providence Family Home in Spokane, WA. Harry (as he was fondly called by all) was born on November 25, 1919 in Waterville, WA to Clay Charles and Beryl DeAtley Beard. He was raised on a family ranch near the top of McNeil Canyon, 11 miles west of Mansfield. He attended Mud Springs School through the 8th grade and graduated from Mansfield High School in 1937. Harry attended Washington State College where he was a member of the Phi Sigma Kappa fraternity. He also enjoyed boxing while at college and won several medals. He graduated with a Bachelor of Science in Agriculture in 1941. For the next 70 years, Harry was a proud Cougar fan and stayed true to the Crimson and Gray win or lose. Go Cougs! Following graduation, he returned to Mansfield to farm with his dad. This is where he met his true love Mae Delicia Mercer and they were married in 1957. Harry and Mae made their home in Mansfield where they raised two daughters, Diane and Jacqueline. Harry was a loving husband, a devoted father, a super, fun grandfather and a passionate wheat farmer. Harry successfully raised wheat for over 50 years and loved farming so much he didn’t retire until he was 70 years old. Harry was quite a sports enthusiast. He enjoyed playing baseball on local town teams. Harry and Mae were avid bowlers, bowling on several teams and competing in tournaments. In his later years, he enjoyed playing golf with his family, friends and in a weekly golf league. He was also a proud supporter of Mansfield sports teams. Harry and Mae never missed a game and would travel many miles to cheer on the Kernels. Many remember Harry as the “Voice of Mansfield.” He announced the little league and high school baseball games, making the kids feel very special when they played in Mansfield. He was often the master of ceremony for basketball games, homecoming, and sports banquets. You’d also find Harry on Main Street during the annual Play Day celebrations introducing parade entries, facilitating games and activities, and playing his favorite Johnny Cash music. Harry loved participating in clubs and organizations that supported the Mansfield community. He was one of the early founders of the Mansfield Lions Club where he served as the treasurer for several years. He recently received an award acknowledging his 42 years of service as a charter member and a leader in the Mansfield community. He was also an active member of the Masons, the Grange and the Mansfield Booster Club. Harry enjoyed the simple pleasures in life. He loved being with family and friends, as well as meeting new people. He made it a point to get to know and talk with everyone. He always had a story to tell, a laugh to share and a smile to offer. He will be missed by many. Harry is survived by his two daughters, Diane (Ed) Griffin of Spokane and Jacqueline Beard of Olympia, WA, and one granddaughter Kayla Griffin of Los Angeles, CA. He is preceded in death by his wife Mae and his two sisters Joan Hanford and Imo Jane Williams. Special thanks to the Mansfield United Protestant church family for their loving support of Harry, during his later years living in Mansfield. The family also thanks the staff at Providence Family Home and the medical providers at Horizon Hospice in Spokane for their loving care of Harry these past two years. Memorial services will be held Saturday, September 18, 2021 at 1:00 pm in the Mansfield Gymnasium with interment following at the Mansfield Cemetery. In lieu of flowers, donations may be made to the Mansfield United Protestant Church, the Mansfield Scholars Foundation or a charity of your choice.

Harold Clay Beard, 101, of Mansfield, WA, passed away peacefully on July 20, 2021 at the Providence Family Home in Spokane, WA. Harry (as he was fondly called by all) was born on November 25, 1919 in Waterville, WA to Clay Charles and Beryl... View Obituary & Service Information

The family of Harold C. Beard created this Life Tributes page to make it easy to share your memories.