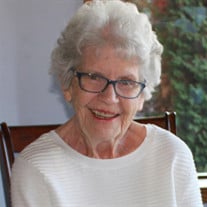 Irene Isabell Smith (Schoenmakers) passed away May 26, 2019, after a brief illness, at Central Washington Hospital at the age of 90 with her family by her side. She was born February 3, 1929 in Wenatchee, WA to William and Mary (Paukowich) Schoenmakers. Her family were orchardists along Rock Island Road where she attended grade school at the old cannery schoolhouse. As a young school girl she was hit by a car severely damaging and scarring for life one of her legs. She graduated from Wenatchee High School in 1947 and from Wenatchee Junior College in 1949. While attending college she met her future husband Robert E. Smith. They were married on July 8, 1950 at St. Joseph’s Catholic Church in Wenatchee and they remained married for 62 years until his passing in 2012. She remained a steadfast member of the church until her death, enjoying weekly mass with her sister and family at the newly constructed St. Joseph’s church. She proudly worked as a “stamper” for 35 years at Cascadian Fruit Shippers located at S. Worthen St and later at their new location until her retirement. She enjoyed crafts, knitting, sewing, pinochle, family gatherings, and being a mother and grandmother. As a mother she served as a Cub Scout Den leader, and avidly supported all the scout, school, sport, dance, camping and outdoor activities of her family. In her retirement years she enjoyed traveling and spending time with her husband and family at their mountain cabin at Fish Lake. She was a three time cancer survivor and is survived by 5 children, 4 sons and 1 daughter, Robert Jr. (Laurie) Spokane, Richard (Becky) Belfair, Cheryl (Steve) Keller Overland Park, KS, Jeff (Charlotte) Wenatchee, and Randy (Rowena) Bellevue, many nieces and nephews, 13 grandchildren, and 21 greatgrandchildren. She was preceded in death by her spouse, parents and all 6 of her siblings. Funeral services will be held on Monday, June 17, 2019, at 10:00 a.m. at St Joseph’s Catholic Church, with reception immediately following also at St Joseph’s. Internment to follow reception at Wenatchee City Cemetery at 1p.m.

Irene Isabell Smith (Schoenmakers) passed away May 26, 2019, after a brief illness, at Central Washington Hospital at the age of 90 with her family by her side. She was born February 3, 1929 in Wenatchee, WA to William and Mary (Paukowich)... View Obituary & Service Information

The family of Irene I. Smith created this Life Tributes page to make it easy to share your memories.