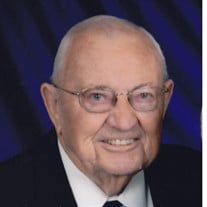 J. Arden Zimmerman passed away February 22, 2021 after a long illness. He was born July 21, 1924 to Jess C. and Nina Davis Zimmerman and was the grandson of the late Eli Zimmerman who had homesteaded in the Squilchuck area where Arden spent his early life. He was a 1942 Graduate of Wenatchee High School, attending Wenatchee Junior College and Washington State College and was a member of Sigma Alpha Epsilon Fraternity. Arden served his county in the U.S. Army and spent time in Osaka, Japan and the Philippines. He married Tressie Ensley and they had three sons: Steve, Doug and Ken. Arden spent several years as a partner with his father in the fruit industry until his father’s death. He went to work for the Chelan County P.U.D. as a Field Engineer and retired after twenty-five years in 1999. It was a job he enjoyed as well as enjoying the people he worked with. Arden enjoyed the outdoors and his hunting and fishing trips to Canada and Alaska. He also enjoyed spending time at his cabin on Lake Chelan, skiing at Mission Ridge, golfing, being a Little League baseball coach for his sons and attending as many sporting events as possible. These were very special moments for him. He was thrilled to be a “Grandpa” to his four granddaughters: Stacy, Sonja, Stephanie and Samantha, whom he loved dearly. Arden had been a member of the Junior Chamber of Commerce, Wenatchee Lions Club, Elks, Search and Rescue Team, Wenatchee Rotary, Applarians, First United Methodist Church (57 years), the Wenatchee Golf and Country Club, and several bridge and dance clubs. He was preceded in death by his parents and a sister, Naomi Zimmerman Edgeman. Arden is survived by his wife, Tressie; sons, Steve (Susan), Doug (Kalleen) and Ken; four granddaughters and several nieces and nephews. Due to the “Pandemic” a family remembrance will be held later.

J. Arden Zimmerman passed away February 22, 2021 after a long illness. He was born July 21, 1924 to Jess C. and Nina Davis Zimmerman and was the grandson of the late Eli Zimmerman who had homesteaded in the Squilchuck area where Arden spent... View Obituary & Service Information

The family of J. Arden Zimmerman created this Life Tributes page to make it easy to share your memories.