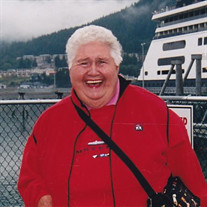 Jacqueline “Jackie" Smart January 7, 1934 - July 25, 2019 Wenatchee, Washington Jacqueline "Jackie" Francis (Newell) SMART, age 85, passed away on Thursday, July 25, 2019, in Wenatchee, Washington. Jackie was born to Don C. and Estella (Zimmerman) Newell on January 7, 1934 in Wenatchee. Jackie graduated from Wenatchee High School in 1952. She then attended Wenatchee Business College. To her credit she learned to type at 40 words per minute with one hand - this was phenomenal considering her physical handicap. Jackie married Cliff Smart on June 3, 1961. They were orchardists for many years. She later worked in the plumbing business for her uncle. She was a lifetime member of Calvary Bible Church. She was a very busy and active lady as noted by her involvement in community activities most of her life. These activities included 4H Club Leader, member Native Daughters of Washington, Washington State Grange (7th Degree) since 1948, National Grange (more than 60 years), Voluntary Service Air Defense (1956 - 1959), Squilchuck Service Club, supporter (with season pass) of Wenatchee Applesox baseball team. As if that was not enough to keep anyone busy, she performed volunteer service in the Defense of North America - ground observer on top of Cascadian Hotel. She received numerous Certificates of Merit and Recognition for grange service at the State and National level. Jackie taught Vacation Bible School and was Secretary for the "Young at Heart" bowling league for ten years She loved to travel - Alaska cruise; to Branson, Missouri; Washington, D.C.; and Grand Ole Opry in Nashville. Among her involvement in so many activities she truly loved gardening. She displayed her products and worked the veggie barn at the Chelan County Fair for 50 years. She was a living legend at the Fair. In 2008 she was honored as the 2008 Volunteer of the Year. Jackie will be missed. She was truly a friendly, likable, cheerful person with a very infectious smile that she shared with everyone. Preceding her in death were her parents; husband, Cliff; and brother Don Newell. She is survived by sister-in-law Val Newell, nephew Kevin (Lynn) Newell, niece Amy (John) Gustin, all of Wenatchee, niece Lisa Newell of Montana and several great nieces/nephews. The family would like to extend heartfelt thanks to Regency Wenatchee where Jackie resided for the last three years and received loving care. Friends and family my visit Jones & Jones – Betts Funeral Home for viewing from 4 to 6 PM Thursday, Aug 1, 2019. A service will be held at Jones & Jones – Betts Memorial Chapel at 10 AM, Friday, August 2, 2019. Charitable donations in Jackie's name to the Beehive Grange, 385 Squilchuck Road, Wenatchee WA 98801 would be appreciated.

The family of Jacqueline "Jackie" Smart created this Life Tributes page to make it easy to share your memories.