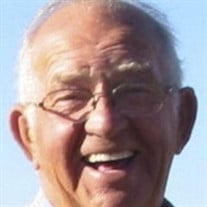 James P. "Jim" Ellis Wenatchee, WA February 1, 1935 - March 8, 2020 James P. "Jim" Ellis was born the eldest of 11 children in Little Falls, MN, to Norman Walter and Lenora Elizabeth (Thommes) Ellis and moved to Entiat, WA, at the age of seven. The family moved to Rock Island, WA, in the mid-1940s. He met and married Patricia (Hammons) Holloway, in 1962, and they raised four children: Brian, Annette, Debbie, and Wendy. They divorced in 1979, and even though he loved again, he never remarried. He lived much of his life in Wenatchee, WA, hosting dozens of Apple Blossom Festival potlucks at the family home, which was very near the parade route. In 1967, he joined the International Brotherhood of Electrical Workers. He earned his “Lineman” certificate in 1974, and he was honored to receive a certificate acknowledging 50 years of membership in the IBEW in 2017. He was also a member of the Eagles, the Elks, and the Rock Island Golf Course. After a heart attack nearly ended his life in 1990, he played golf at Rock Island Golf Course nearly every day of the week for ten plus years, celebrating two hole-in-ones in just one month! Later, his daughter, Debbie, would help him play the course in their minds as he was recovering from surgery to remove his leg. Health issues never dampened his spirit or his smile! He moved to Arizona in 2002, to enjoy the sunshine and to play a little golf, but moved back to Wenatchee, in 2017, to be closer to his family that he loved so much. He loved reading old westerns, driving his old Lincoln, going to the casino, and oh, how he loved to dance. He loved maple bars, Mexican food, and home-grown tomato sandwiches. He is survived by his four children and their spouses: Brian (Melody) Ellis, Annette (Jose) Hernandez, Debbie (Roger) Boyer, Wendy (Troy) Shiflett; and six grandchildren: Chad (Natasha) Warmenhoven, Josh Syria, Nick (Debbie) Ellis, Spencer (Cassy) Ellis, Cole (Kimberly) Shiflett, and Michelene (Jeremy) Torrey; and five great-grandchildren: Ryder, Madelynn, Case, Brooklyn and Decklan. He is also survived by four sisters, two brothers, four sisters-in-law, and one brother-in-law: Geraldine (Dick) Dahl, Carol Reilly, Sue Ellis, Doris Ellis, Tom (Donna) Ellis, Judy Ellis, Suzie Ford, and Pete (Angie) Ellis. He was loved by countless nieces and nephews who will always remember him for his quick smile and his customary greeting, “hello sweetheart!” He was preceded in death by his parents; three brothers: Richard (Dick), Norman (Jay) and Ronnie (Hoss); and his sister and brother-in-law, Sharon and Dale Moser. Interment is planned at Evergreen Mausoleum in East Wenatchee, WA, and a Celebration of his Life will be held later this summer. In lieu of flowers, please donate to your favorite charity. Those of you that knew him will always remember his signature farewell: “We’ll talk at you later.”

The family of James P. "Jim" Ellis created this Life Tributes page to make it easy to share your memories.