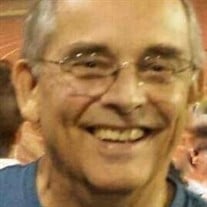 James R ‘Jim’ Kelso was born to Ralph and Pearl Kelso September 30th, 1950. A lifetime resident of Wenatchee, he passed at home on the 2nd of January as comfortably as we could make him. Dad was a mechanic for as long as I knew him…and I came along early so it was a lengthy tenure. He could fix pretty much anything that had a motor, but what he really wanted to do was fly. My Grandpa Appel (Dad’s father-in-law) piloted his own plane, so took him up and let him try out his wings. After several perilous attempts at landing, it became apparent Dad’s depth perception was missing. He would need to get his speed fix in other ways…fast cars and one fast woman in particular. He and Goldie June Appel from little old Tonasket Washington were married in 1971 – twice. Once for me, and once for everyone else. In January of 1972 I came along to round out the little Kelso family. Despite his innocent appearance, Dad had a touch of daredevil in him. And try as he may, his dimples gave him away every time. Harrowing rides up the mountain every winter for a Christmas tree, jumping Lady of the Lake wakes at Lake Chelan, more than one speedy race with the authorities. (He was 1 for 2 with the Wenatchee PD.) And while his attempts at stock car racing generally ended with him smashed into a wall, his mechanical skills allowed him to enjoy racing without actually racing. There was rarely a dull moment. But you know, when you’re bi-polar life can be like that. Some days it’s all one can do to maintain some semblance of normal…other days it’s a race to outrun yourself. All things considered I’d call it a win. The man had a marriage that spanned over 50 years, a lifelong career that provided well for his family and people who loved him. While Dad worked for several auto repair shops, even ran his own business for a bit, he ultimately went to work at the Chelan County PUD. He put in over 20 years, most of that as the night Fleet Services Foreman, retiring in 2006. He and Mom moved to a great place after I went to college…a secluded three acre property in town complete with horses, ducks and chickens. In addition to fun on the farm, Dad had quite a few hobbies to keep him busy. He restored several cars over the years, and always had a project in the works. He built and flew model airplanes and built numerous model cars but may have loved model trains best. Many an extra room became a train room complete with mountains, lakes and all the details. There will not be a funeral service – Dad wasn’t a big fan. But people like to do nice things when someone they care about passes. A monetary or supply donation to the Wenatchee Humane Society (https://www.wenatcheehumane.org/ways-to-give) would be really nice. He never wanted any pets, but he was a sucker for a stray cat, and he was always the one sneaking the dog treats under the table. Dad was preceded in death by his parents, Ralph and Pearl Kelso (Schafer) and older sister, Patricia Ann Schmidt. Those of us remaining are his wife, Goldie; me, Jonie Kelso and his grandson, Garrison Donovan; his baby sister, Sue E. Kelso of Spokane; his niece, Brittany Finkelstein, her husband Lucas and great nephew Avery of Santa Clara, CA; his cousin, Dick Kelso, wife Jan and their boys, Ryan Kelso and Derrick Kelso. (There aren’t many of us Kelso’s left, so I’m listing us all!) And we can’t forget the “kids”, Great Pyrenees brother and sister Biggs and Princess Molly (his favorite.) They were always there to make him feel better when he returned from dialysis. A special thank you to Misty Stuart; thank goodness for her knowledge and candor in guiding us to make Dad’s last days more comfortable. Some of Mom’s and my early attempts were certainly comical…he chuckled at us more than once, but at the end of the day, just as at the end of his life, that’s how we dealt with the hard stuff…with humor. Because if we couldn’t laugh, well, what would be the point? Godspeed Jim, Dad, Kelso…see you on the other side.

James R &#8216;Jim&#8217; Kelso was born to Ralph and Pearl Kelso September 30th, 1950. A lifetime resident of Wenatchee, he passed at home on the 2nd of January as comfortably as we could make him. Dad was a mechanic for as long as I knew him&#8230;and... View Obituary & Service Information

The family of James R. "Jim" Kelso created this Life Tributes page to make it easy to share your memories.